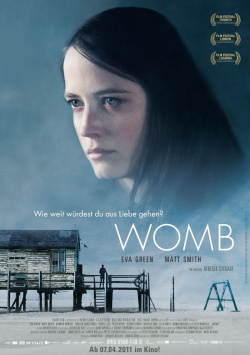 As a child, Rebecca (Ruby O. Fee) spent summers with her grandfather by the sea, where she befriended Thomas (Tristan Christopher), who is the same age as her. When she has to move to Tokyo to live with her mother, the children vow eternal friendship. But when she returns twelve years later as a young woman (Eva Green) to her now-deceased grandfather's house and meets Tommy (Matt Smith) again, sparks immediately fly between the two again. But the passionate affair between the two does not last long, because Thomas is killed in a car accident. But Rebecca just can not let go and therefore takes a radical decision: with the help of a DNA sample of the deceased Tommy, she wants to give her great love new life as a surrogate mother. With the new Tommy, she retreats to an isolated house on the beach and gives all her attention and love to the child, who year after year becomes more and more like her deceased loved one. But at some point she must ask herself when she will have to tell Tommy the truth about how he came to be - and what the consequences will be for her...

However, Womb struggles with a very heavy handed, extremely worn production that makes it hard to sympathise with the protagonists or engage with the story. This one is extremely interesting at its core and in principle provides a lot of material for discussion. After all, topics like human cloning, dealing with grief, but ultimately incest are touched on in a pleasantly unobtrusive way. For one has to wonder what form of love Rebecca feels for the cloned Tommy. Is it purely maternal feelings, or - as he matures into a young adult - something more? Hungarian director Benedek Fliegauf gives away the possibilities this controversial material offers in favor of numerous scenes of stifling silence, defined only by the suffering gazes of the protagonists.

Sure, on the one hand, Fliegauf deserves credit for not voyeuristically cannibalizing the subject matter. He approaches the complex event with a rather poetic underpinning. But on the other hand, he loses himself too much in a cramped artificial dramaturgy, which will make it difficult for the ambitious film to find its audience. Because in the end Womb should be a romantic fairy tale that maybe challenges its viewers intellectually, but doesn't strain them to such an extent that there's hardly any entertainment value left in the end. Considering the good actors and the wonderful locations, the audience should have left the cinema with a smile on their face. But this will probably succeed the fewest, so that Womb, despite some very good elements, on balance only for hard-boiled program cinema lovers just worth seeing

Cinema trailer for the movie "Womb (Deutschland/Ungarn/Frankreich 2010)"
Loading the player ...