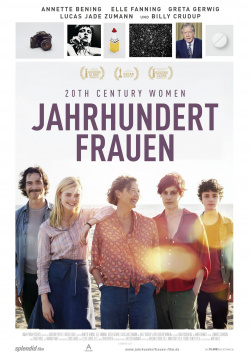 Santa Barbara, late 1970s: Dorothea Fields (Annette Bening), in her early 50s, self-confident and emancipated, raises her 15-year-old son Jamie (Lucas Jade Zumann) here alone. She's sure she's doing everything right with her particular brand of parenting - until one day, a reckless game nearly kills Jamie. Now she realizes she just doesn't understand the world her son is growing up in. And so she asks her lodger, photographer Abbie (Greta Gerwig), and Jamie's best friend Julie (Elle Fanning), to help her son find his place in this crazy world. But when Jamie learns of this interference in his life, he begins to rebel against his mother all the more.

Century Women is finally, after a six-year hiatus, the latest film from director Mike Mills, who thrilled audiences in 2010 with the wonderful romance Beginners and earned supporting actor Christopher Plummer an Oscar. In his new film, Mills once again tells an unusual family story with a great deal of emotion and enigmatic wit. With a sensitive hand, he draws wonderful characters who are so interesting and charming precisely because of their flaws and quirks. But not only the characters, but also their not exactly uncomplicated relationships with each other are drawn quite wonderfully and make this film a real pleasure.

However, Mills does an excellent job of portraying three different generations in a believable way. With plenty of moody 70s flair, engaging voice over commentary and a well chosen soundtrack, he makes the feelings of the protagonists very tangible. You understand why Dorothea, despite the strength she projects to the outside world, feels so weak, especially in relation to her son. Why Abbie, despite successfully beating a bout with cancer, feels she has lost the meaning in life. And you also understand why Julie has no problem sleeping with guys she doesn't care about, but why she definitely doesn't want to have sex with Jamie - even though she regularly shares a bed with him.

So not only is the relationship between mother and son an extremely interesting aspect of the film, but also the friendship between the boy and Julie, or between Jamie and Abbie. Mike Mills presents a finely observed blend of drama and comedy, of the anxieties in a world in transition and ode to life. Century Women is a beautiful, witty and extremely entertaining film that leaves only one conclusion: Absolutely worth seeing!