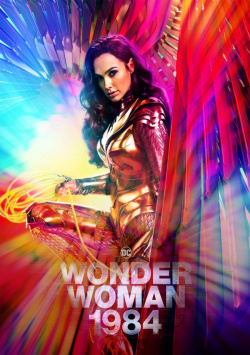 1984: It's been many decades since Diana (Gal Gadot) aka Wonder Woman saved the world from Ares, the god of war, and lost the love of her life, pilot Steve Trevor (Chris Pine), in the process. Now Diana lives in seclusion in Washington, where she works as an anthropologist at the Smithsonian Institute. As a superhero, she remains in the shadows as she uses her powers to help people in emergency situations. But then the FBI brings an artifact to the museum for Diana's colleague, unassuming scientist Barbara Ann Minerva (Kristen Wiig) to investigate. As it turns out, it's a wishing stone that really can grant one's every wish. But of course, it comes at a price, which is something not only Barbara and greedy businessman Maxwell Lord (Pedro Pascal) have to realize. Diana also gets to feel this when her greatest wish suddenly comes true...

I admit that I was really looking forward to "Wonder Woman 1984". I really like Gal Gadot in that role and think the first installment is one of the best entries in the DC Extended Universe. Also in "Batman v. Superman" and the much-maligned theatrical version of "Justice League" (the Snyder cut, eagerly awaited by fans, will be released worldwide on March 18, 2021. Where the film will be shown in Germany will be announced shortly), Gal Gadot's Wonder Woman was undoubtedly the strongest character. That for the sequel in addition to Gadot also her co-star Chris Pine and director Patty Jenkins would be back on board, increased the anticipation, which, however, due to the Corona pandemic was repeatedly put to the test.

Now the film is finally also in Germany to see - and unfortunately I must say that my anticipation in large parts of the two-and-a-half-hour work was disappointed. And that partly even really bitter. But I'll start anyway with the aspects that I liked well to very well. After all, I didn't give the movie three stars without a reason. What I find very positive is the attempt to not simply deliver a copy of the first film, which was extremely successful with a worldwide box office of over 800 million dollars. There are a few recurring elements, but on the whole "Wonder Woman 1984" is visually as well as dramaturgically structured quite differently than its predecessor. That may not always work to the sequel's advantage, but it's basically a good thing.

The biggest strength is Gal Gadot and Chris Pine. They simply have great chemistry together. The scenes between Diana and Steve are wonderful and deliver not only some humor, but real emotion especially towards the end. In addition, Diana gets the chance to develop as a character through this "second chance", which Gal Gadot also does very well. There's really nothing to fault here. The 80s feel is also captured very well, especially at the beginning. The whole thing seems more colorful and lighter than the first film, which should have been a major strength. But unfortunately, Patty Jenkins fails to realize this potential.

This brings me to the problems that the film keeps struggling with. First, there's the story, which is simply too mundane for a great superhero movie, while also being completely unnecessarily overstuffed. Jenkins, who delivered the perfect balance of classic adventure film and great fantasy cinema in the first part, spiced with just the right pinch of tongue-in-cheek humor, seems completely overwhelmed here. The characters - most notably Maxwell Lord - are completely overdrawn and their actions are at some point simply incomprehensible.

While Barbara is still a not uninteresting character at the beginning, albeit one that is portrayed in an arguably clichéd manner. But you can understand why she wants a change, why she wants to be strong and independent. However, the more powerful she becomes, the less interesting she is portrayed, culminating in the completely silly transformation into Cheeta. She becomes a character that is actually very popular with comic book fans, and her potential is completely wasted here. Maxwell Lord, on the other hand, is a genuine cartoon character from the get-go, which unfortunately just comes across as silly by the finale. True, you can tell that Pedro Pascal ("The Mandalorian") had a lot of fun with this role. But that doesn't help the film either...

Another problem is the effects. These are okay in some scenes, appallingly bad at other moments. Not only do some green screen shots make you feel like the movie is set in the 80s, but also that it was made in that era. And then there are some really stupid mistakes that diminished my enjoyment of the film. Normally, I don't care much about connection errors. These things can happen. It's only when they're extremely noticeable, as they are here, that I get annoyed. That is the case here with the first meeting of Diana and Barbara. Here Barbara stuffs a port of papers into her bag, from which they have just fallen. In what follows, the papers spill out of the sides of the bag at one point, only to disappear completely. We're not talking two or three pages here, but a whole bunch - that really should have been noticeable in the editing. In addition to the effects not really being convincing, things like this make the production feel a little loveless in places.

"Wonder Woman 1984" has great moments, don't get me wrong. There are things I really liked about this sequel. And for that very reason, I find it all the more disappointing that there are so many important aspects that don't work. Let's hope that for the already announced third film, Patty Jenkins can once again play to all the strengths that made the first film so successful and deliver a film that does this superheroine and her actress justice. The bottom line for this excursion into the 80s is that it's "worth seeing" only with some significant cutbacks! Too bad!