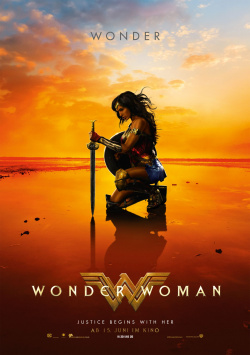 On a small island, safely shielded from the rest of the world, the Amazon princess Diana (Gal Gadot) is trained to be a strong warrior. Yet she has no idea of the truly divine power that lies dormant within her. It's not until young pilot Steve Trevor (Chris Pine) washes up on the beach after a crash landing, pursued by enemy soldiers, that Diana gets a glimpse of the world that lies beyond the protective umbrella. And that impression is not a good one. So she decides to accompany Steve and fight for humanity against evil. Because she is convinced that the bloody turmoil of the First World War can be stopped if she succeeds in defeating Ares, the god of war. And so Diana goes into battle - and Wonder Woman is born!

Wonder Woman is the latest entry in the DC Extended Universe, which has so far been under no good star after Christopher Nolan's Dark Knight trilogy. Even though Man of Steel and Batman v. Superman didn't really flounder at the box office, the films weren't particularly well received by critics or fans. Suicide Squad was a step in the right direction, but still couldn't really meet the expectations of many fans. The good news, however, is that the makers listened to the criticism and seem to have learned from it. Because aside from the once again somewhat overstuffed finale, Wonder Woman gets everything right that was criticized about the other DC movies.

Director Patty Jenkins, who has incomprehensibly not directed a feature film since her multi-award-winning 2003 debut Monster, strikes the perfect balance here between classic adventure film and great fantasy cinema, spiced with just the right dash of tongue-in-cheek humor. Gal Gadot has already proven in Batman v. Superman that she is the perfect choice to embody the comic book heroine created in 1941. But it's here that she really gets to show off all her strengths. Gadot is just as convincing as an action heroine as she is as an actress. Since she's not just reduced to the warrior in the sexy outfit here, the Israeli actress can actually give the character something like depth - something her fellow Superman and Batman in the DC Extended Universe have lacked so far.

The film also benefits immensely from the great chemistry between Gadot and Chris Pine, who gives an extremely charming hero but never steals the show from the main character. Because this is fully Wonder Woman's movie - and that makes it a real first: it's the first real blockbuster with a female superhero (the debacles Catwoman and Elektra don't count and should better disappear from the collective comic-fan memory anyway) - and then with a really great one, too!

It should also be mentioned positively that the film - unlike the other DC films - is no longer so gloomy and especially the first big action sequence takes place in beautiful daylight. This increases not only the show values, but also the fun factor of the film significantly. But even Wonder Woman, for all its deserved praise, is not entirely without its flaws. For example, the supervillain can only convince to a certain extent and towards the end the style for which Zack Snyder had to take so much criticism with his films takes over again. But even if the last act is not quite convincing, Wonder Woman is overall a really successful comic adaptation and a great superheroine film that offers the audience action, great effects, suspense, humor and a little dash of romance. What more could you want? For this, there is clearly a: Absolutely worth seeing!