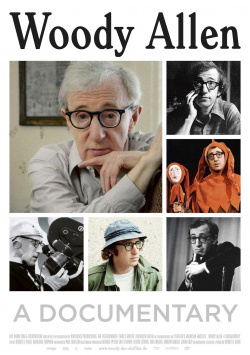 Copyright: B Plus Productions + Sony Pictures

What you always wanted to know about Woody Allen but never dared to ask - filmmaker Robert B. Weide gives you the answers. Over a period of almost two years, Weide accompanied the legendary filmmaker and created a comprehensive portrait of Woody Allen from numerous interviews with Allen himself, family members, friends, colleagues and companions, as well as with the help of numerous archive material on behalf of the American television station PBS for the series American Masters. From the more than three-hour-long TV version, a much shorter version with a running time of two hours was created for the international theatrical release, which lacks some interesting aspects of the long version, but still paints a very good and comprehensive picture of Allen's life and work.

Woody Allen: A Documentary looks at the director from his childhood and adolescence through his beginnings as a stand up comedian, gag writer and actor to his early successes in front of and behind the camera. Particularly worth watching in this early part of the film are old TV clips with interviews and funny stand up footage of Allen, who initially had great difficulty stepping into the limelight himself. His first directorial efforts, but especially his cult films The Urban Neurotic, Manhattan, Broadway Danny Rose or Zelig, are given special space. However, the numerous excerpts from these films also make it clear why Woody Allen enjoys such high esteem and genuine cult status as a director, actor and artist, despite some cucumbers that he has delivered in the course of his career.

In the theatrical version in particular, the films from the 90s and the early 2000s come up awfully short or are not mentioned at all. As good and comprehensive as the first chapters of this cinematic biography are, their conclusion feels perfunctory and rushed. Granted, many of the films Allen made in the years leading up to Match Point simply don't have the place value of his early work, but this period of his career is still not uninteresting.

Nonetheless, Weide's documentary is a very entertaining and insightful film that also addresses more controversial parts of Allen's life, leaving the impression of a comprehensive and also honest biography. Sure, the film is first and foremost a tribute to the artist, but it's very pleasant to hear critical voices as well - even if they sometimes come from Allen himself. If you appreciate Woody Allen as a filmmaker, actor or musician, if you could especially laugh at his earlier films or if you don't know what he did before The Urban Neurotic, you simply can't miss Woody Allen: A Documentary simply can't pass it by. Absolutely worth seeing!

Copyright: B Plus Productions + Sony Pictures