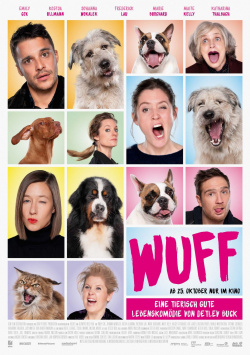 Completely distraught after being unexpectedly abandoned, young journalist Ella (Emily Cox) adopts a dog that escapes from her only a short time later. Through the forester Daniel (Kostja Ullmann) she not only finds the dog again, but also inspiration for a new story. Cecile (Johanna Wokalek) is also in a tangible crisis. For her son, the family dog is a great love, but her husband can't get along with the creature at all. Silke (Marie Burchard), on the other hand, has a knack for dogs and earns her money as a dog trainer - until ex-footballer Oli (Frederick Lau) snatches her clients away with a clever idea.

With Wuff, director Detlev Buck has staged an episodic ensemble comedy that has many strengths, but also struggles with some of the genre's weaknesses. A big plus point is definitely the cast. With a few exceptions, the actors are able to convince even in slightly weaker moments. Especially Frederick Lau, Emily Cox and Kostja Ullmann quickly have the audience's sympathies on their side and can thus also play themselves out of the shadow of their four-legged co-stars. Of course, with the dogs' high cuteness factor, that's not always easy. The only real acting disappointment is Maite Kelly, whose performance seems too strained and put upon, especially when compared to her more experienced colleagues.

Also some of the storylines can convince. The story of Ella and Daniel for example is really nice and also the somewhat bumpy but very emotionally resolved plot around Cecile and her family belongs to the stronger moments of the film. Otherwise, the action remains mostly nice, but also very superficial. As is so often the case with ensemble films like this, there simply isn't time to properly flesh out the individual stories. And so not only do many a gag fizzle out into nothingness, but also the emotionality falls by the wayside.

Wuff is light entertainment for romantics and dog lovers. Not quite a big hit, but despite some weaknesses still good entertainment for the mainly female target audience. If you like German romantic comedies of the very conventional kind, you won't go wrong with buying a movie ticket. Worth seeing

Cinema trailer for the movie "Wuff (Deutschland 2018)"
Loading the player ...