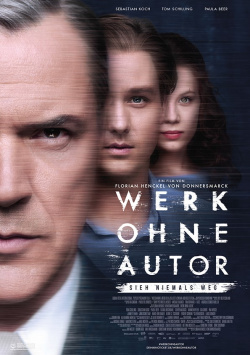 Don't look away - that's the last message Kurt Barnert (Tom Schilling) got from his aunt Elisabeth (Saskia Rosendahl) as a little boy, before she was taken away by the Nazi regime due to a mental disorder. And Kurt sticks to it, going through the world with his eyes open and discovering his love of art along the way. After the war ends, he begins his art studies in the East, falls in love with student Ellie Seeband (Paula Beer) and flees with her to the West. Everything looks as if their lives - unlike those of his parents - will turn out well. But Kurt has no idea that a terrible event connects him with Ellie's father, the renowned professor Carl Seeband (Sebastian Koch).

The huge success of Oscar winner The Lives of Others was director Florian Henckel von Donnersmarck's ticket to Hollywood. There he was allowed to direct the crime thriller remake The Tourist with Johnny Depp and Angelina Jolie. However, the hoped-for commercial and artistic success failed to materialize. After a very long hiatus, the filmmaker has now returned to German cinema, but has brought top-class reinforcements from Hollywood in the form of cinematographer Caleb Deschanel and composer Max Richter.

His latest film is called Werk ohne Autor and is loosely based on the life and work of artist Gerhard Richter. The production is great in terms of craftsmanship, but not very subtle in terms of dramaturgy. You can accuse Henckel von Donnersmarck of that, but you don't have to. Although there are some scenes that are painted more with a sledgehammer than with a delicate brushstroke, the film as a whole has an extremely great emotional impact that is difficult to escape as a viewer. And so it is that the three-plus hour running time almost flies by.

Besides engaging images and stirring music, this is mainly due to the great actors. Tom Schilling manages brilliantly to carry large parts of the film on his own, supported by an enchanting Paula Beer, who unfortunately gets to show a little too rarely how strong an actor she can be as well. Saskia Rosendahl is only seen briefly, but uses every minute of it to leave a big impression on the viewer. And then there is Sebastian Koch, who already played great in Das Leben der Anderen. Why Henckel von Donnersmarck chose the actor again is actually clear in every scene, but especially in the last one, where Koch is able to express more almost completely without words than some other actors manage to do in the course of an entire acting career.

As I said, there's plenty to criticize about Work Without an Author. Nevertheless, it is undeniable that Florian Henckel von Donnersmarck has once again delivered very great cinema that touches and stirs, that makes you think, but in the end also somehow very happy. A great film that is rightly considered a German Oscar hopeful. Absolutely worth seeing

Cinema trailer for the movie "Work without author (Deutschland 2018)"
Loading the player ...