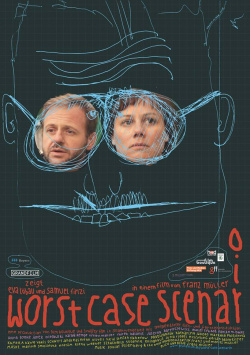 It's actually the perfect idea: a film about the European Football Championship is to be shot at a campsite in Gdansk. It doesn't get more authentic than that! But when the production learns that it is to be a comedy in which men light their farts - and very close to the place where the Nazis killed thousands of people in the Second World War - the backers pull out. But director Georg (Samuel Finzi) still wants to make the film at any cost. Without money and without a large part of the team, the film is improvised. Real campers are to take on some of the roles, the plot is adapted accordingly - and an expensive cameraman or professional sound is not really needed. Georg is convinced that there is a solution for every problem. But the ever-shrinking team, insurmountable language barriers, oversized egos and finally the weather turn the shooting into a real disaster. But the worst case scenario only occurs when Georg also learns that his costume designer Olga (Eva Löbau) is pregnant by him and that he now has to deal with private disputes in addition to his artistic problems...

With Worst Case Scenario, Franz Müller has created a delicious real-life satire in which he has processed many of his own experiences. The circumstances that led to the making of the film are not dissimilar to those in the story of Georg and his team. Müller, his actors and his team also lived on the campsite in Gdansk in sometimes very bad weather, many roles were filled on the spot by amateurs, the scenes were mostly improvised and large financial resources were also not available. Moreover, Worst Case Scenario was actually born out of necessity, as the film Müller actually wanted to make did not materialize.

Due to its extreme proximity to reality, the film-within-a-film story not only shines with a heavy dose of self-irony. It also has a rousing authenticity and sometimes disarming bite, through which minor hangs are covered very well. When Georg defends a supposed lack of professionalism by saying that Fellini would have made films this way too, or when a scene in a cafe almost casually features a baby in the foreground watching cell phone videos and thus being sedated by her parents, it's just hilarious in a way that's on the one hand subtle and yet somehow very direct.

Sure, if you can't get into the film's obviously improvised style, you won't find much of it funny, but rather exhausting. You should already have a soft spot for more experimental filmmaking, as well as for satires about the movie business, about inflated egos and about relationship inabilities. Because then Worst Case Scenario is a great pleasure and one of the more pleasant surprises of German cinema this year. For this there is then also a deserved: Worth seeing!