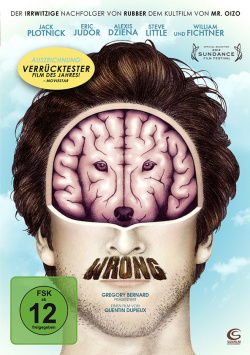 Contents: It's actually a morning like any other. As soon as the alarm clock jumps from 7:59 to 7:60, Dolph (Jack Plotnick) has to get up and go to the job he got fired from weeks ago. But something is different that day. Dolph's beloved dog Paul is gone. He is nowhere in the house and even Dolph's neighbour, who decided to spontaneously start a new life, did not see Paul. His search leads Dolph to the mysterious Guru Chang (William Fichtner), who admits to having kidnapped Paul because Dolph hadn't taken enough care of the four-legged friend. Unfortunately, he cannot return the dog to him because Paul has disappeared since an accident with the car in which he was transported. A dog detective might be able to help if he didn't need help himself. But this is only the beginning of a bizarre odyssey, which has many surprises in store for Dolph...

After he has told us the story of a car tire in "Rubber", which turns from a heartbreak to a murder machine, filmmaker Quentin Dupieux remains true to his surreal, completely idiosyncratic style even in his latest director's work "Wrong". There's an office in which it's constantly raining, which seems perfectly normal for the employees, a detective who can show the memories of Paul's excrement as a video, a neighbor who persistently denies jogging even though Dolph watches him every morning, an alarm clock that even indicates 7:60 a.m. and many other small and big unusual things.

This is very special and takes getting used to - but also really unique. Dupieux manages in a very weird, yet somehow poetic and beautiful way to make a small, almost insignificant story into something unforgettable. Surely, there are scenes where you ask yourself which mind-altering substances the director has taken to come up with such ideas. It's a humor that isn't everyone's cup of tea, but it's filled with fantasy, depth and complete craziness - a mixture you actually have to see to believe that such a movie really exists.

"Wrong" is anything but a mainstream cinema suitable for the masses. It's a very unusual comedy that you have to get involved with in order to fall into the bizarre world of Quentin "Mr. Oizo" Dupieux and discover the genius of this work. This work is absolutely worth seeing for viewers who like to get involved in such experiments and appreciate cinema of the completely weird kind!

Picture + Sound: The picture of the DVD reproduces the somewhat unreal atmosphere of the film well by a slightly overstylised seeming colour scheme. The visual implementation is also convincing in terms of overall sharpness and cleanliness. The sound is very calm, the surround speakers rarely get much to do. But scenes in which ambient sounds such as rain are used in addition to the dialogues create a harmonious surround atmosphere. Good!

Extras: As a bonus there is a Making of (approx. 17 min.), which doesn't offer a look behind the scenes in the conventional sense. Rather, these are simple home video recordings of different people (including the actors) reading out excerpts from the script. The trailer for the film and further program tips of the provider are also still on the program.

Fazit: "Wrong" consistently sets the extremely bizarre tone, which director Quentin Dupieux already struck during the car tire horror "Rubber". The movie is weird, crazy, unpredictable and very, very special. If you get involved, you can have a lot of fun. But if you expect a rather straightforward comedy, you are completely wrong! But absolutely recommendable for friends of the surreal!