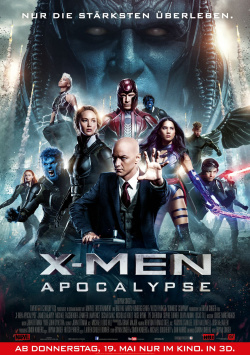 1983: It has been several years since the X-Men, with help from the future, destroyed the Sentinel, saving humans and mutants from certain annihilation. While Charles Xavier (James McAvoy) focuses on running his school, Magneto (Michael Fassbender) has completely retired. With his wife and daughter, he leads a modest life in Poland, where he tries to shake off his dark past. But when his true identity is revealed here and it leads to disaster, it drives Magneto straight into the arms of the immortal Apocalypse (Oscar Isaac), who has been freed from his millennia-long imprisonment. Now he's rallying powerful mutants to join him in building a new world order. To do this, he also needs the powers of Professor X, whom he brings under his control. Now it's up to the X-Men, led by Raven (Jennifer Lawrence), to face this seemingly invincible foe in an epic battle.

With 2014's X-Men: Future is the Past, Bryan Singer had achieved a real feat. After four X-Men movies and two Wolverine adventures, he was able to catapult what should have been a somewhat worn-out franchise to new heights. Fans and critics agreed that Singer, director of the first two X-Men movies, had not only directed one of the best installments in the series, but also one of the best superhero movies of the year. The perfect mix of adventure and fun, of spectacle and thrilling story made this installment so successful. It was clear to everyone involved that the next film would have to measure up to it. And so X-Men: Apocalypse truly doesn't have it easy. Add to that the fact that this installment, even more than the other films, requires you to know the prequels in order to understand all the plot elements, allusions and developments.

That the first reviews of the new X-Men were rather restrained or even negative, was perhaps not really surprising, but is actually not really appropriate. Because even if there may be some quite justified points of criticism, X-Men: Apocalypse has become overall an absolutely successful, entertaining and coherent spectacle, which develops familiar characters and at the same time introduces a few new characters. Admittedly, this is exactly where one of the film's weaknesses lies, as even such interesting characters as Psylocke (Olivia Munn) or even Nightcrawler (Kodi Smit-McPhee) get a bit lost in the destructive finale after a good introduction at the end. Still, the new characters - or the younger editions of already familiar characters like Cyclops or Storm - definitely prove to be an asset to this X-Universe.

Jean Grey, portrayed by Game of Thrones star Sophie Turner, takes a central role. Singer establishes very well the power that emanates from the mutant and the dark shadow that hangs over her fate. Hopefully this will be done better and more effectively in an upcoming sequel than Brett Ratner managed ten years ago in the rather unloved X-Men - The Last Stand. However, Sophie Turner needs to work a little on her mimic expressiveness between now and then, and it's still not entirely convincing here. Oscar Isaac, who recently became a secret audience favorite as Poe Dameron in the last Star Wars movie, can deliver a really convincing performance as the all-powerful Apocalypse, covered by makeup and CGI effects. That's partly because Singer gives him something more to do than just stare around in evil.

But the best actors are still James McAvoy as Professor Charles Xavier and Michael Fassbender as Magneto, who has finally found his way onto the right path, only to be torn away from it again in a particularly tragic way. While the eternal battle between good and evil that Magneto has fought with himself in nearly every film is truly no longer new or original, Fassbender still manages to bring new facets to the character time and time again. Oscar winner Jennifer Lawrence, on the other hand, fails at this very point. Her portrayal of Raven/Mystique remains surprisingly static and - if you'll forgive this pun - colorless.

But in the end, even that doesn't really have a negative effect on the very successful overall picture. The only real problem the film has to contend with is that it hits theaters just a few weeks after The First Avenger: Civil War - a near-perfect superhero movie for a much wider audience. Given that X-Men: Apocalypse is really only for fans of the series, and then it does have some visible weaknesses, it does fall considerably more short in the immediate company of Captain America, Iran Man & Co. than it would have without that competition. Nonetheless, this is one of the better X-Men movies and for anyone who liked First Class and Future is the Past then too: absolutely worth seeing!!!!