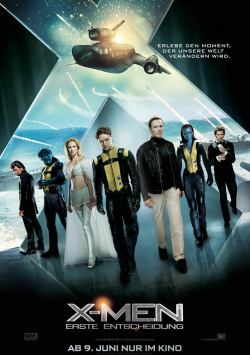 After three successful cinematic adventures - not counting the Wolverine spin-off - it's time to take a look at the beginning of the mutant saga. X-Men: First Decision shows the fan the beginnings of the X-Men, how Charles Xavier became Professor X and Erik Lehnsherr became the dreaded Magneto. If you're rolling your eyes now and think you're in for another weak and unsurprising prequel, you're sorely mistaken. For Kick-Ass director Matthew Vaughn's film is not only a great comic book adaptation and a first-rate superhero movie, but also perhaps the best X-Men movie ever made to date.

The film begins just as Bryan Singer's first X-Men did, in a concentration camp where a very young Erik Lehnsherr first discovers his powers that will later turn him into Magneto. It's these powers that sadistic concentration camp doctor Dr. Schmidt (Kevin Bacon) wants to harness, and recognizing that Erik unleashes his powers in a state of rage, he kills the boy's mother in front of him. The reaction is so powerful that Erik is able to escape his henchmen - but he vows eternal revenge. Years later, Erik (Michael Fassbender) is still searching for Dr. Schmidt, who now calls himself Sebastian Shaw and has become a truly powerful adversary. At the same time, young Charles Xavier (James McAvoy), along with his ally Raven (Jennifer Lawrence), discover that they are not the only mutants. He tries to gather as many mutants around him as possible to use their powers united in the fight against evil. Erik also joins this fight. A friendship quickly forms between him and Charles - but it is soon put to the test.

It's not just the numerous references to the previous X-Men films, including a very brief but simply awesome guest appearance by a much-loved mutant, and watching the origins of popular characters like Mystique (if you blink too often, you might miss the mini-appearance here of the later Mystique Rebecca Romijn) or Hank, better known as Beast, that make this prequel so worth watching. Rather, it's the way Matthew Vaughn has combined a good story, neat special effects and fast-paced action through his obvious love of the genre into a more than entertaining whole.

Especially in his choice of actors, Vaughn proved a lucky hand. Michael Fassbender in particular delivers a first-rate performance as Erik Lehnsherr, driven by a lust for revenge. The mix of coolness and rage bordering on insanity make Magneto arguably the most interesting character in the film. But even though Fassbender steals the show from his colleagues here, he never deliberately plays himself into the foreground and leaves enough room for the other actors to shine with first-rate performances. This is especially true for James McAvoy, who as Charles Xavier, with a full head of hair and without a wheelchair, but instead, especially at the beginning, with a rascal charm that hasn't quite worn off yet, is clearly distinguishable from Patrick Steward's portrayal of Professor X. In both characters, the change in character is so clear that it's easy to see why he's so different from the rest of the cast. With both characters the change they go through in the course of this story is absolutely comprehensible. They are not yet the characters we know from the other movies. The fact that there is no frantic attempt to copy the portrayal of the older predecessors gives the characters a versatility and depth that many other representatives of the genre unfortunately lack.

Besides Fassbender and McAvoy, however, several other actors should be mentioned who make X-Men: First Decision a great pleasure purely from an acting perspective. Besides shooting star Jennifer Lawrence (The Beaver, Winter`s Bone), who as Raven, later known as Mystique, is allowed to show completely new sides of the shapeshifter, especially Nicholas Hoult (About a Boy), who as Beast illustrates the inner struggle of the mutants particularly well, January Jones, who quite contrary to the name of her character Emma Frost might rather cause some (male) viewers to break out in a sweat, and of course Kevin Bacon as the sadistic villain. Bacon once again proves his versatility, with his enjoyment of this nasty character clearly evident.

The idea of setting the story in the context of the Cuban Missile Crisis also proves to be a good decision. The real-life backdrop intensifies the tension and adds just the right amount of spice to an already good story. Considering the importance of the 1960s not only for the US, this timing for the first public appearance of the mutants is very well chosen. So besides the good actors, the story is also right. Does that mean the film is perfect, at least for fans of the genre? No, it certainly doesn't. Many of the side characters, for example, simply come too short and also not all effects can fully convince. But in the case of X-Men: First Decision this is complaining on a high level. Because the positive aspects are so strong that you as a viewer, if you are not yet dominated by the omnipresent cynicism, get so lost in the entertaining events that you only become aware of the flaws - if at all - in retrospect after long deliberations.

X-Men: First Decision is great popcorn cinema and one of the rare cases in which a sequel/remake/prequel can easily maintain or even surpass the level of its predecessors/the original. Good actors, a fast-paced production and an exciting story make this journey to the beginnings of the X-Men a must-see for all fantasy, action and comic book fans. Pure fun cinema of the best kind and therefore also: Absolutely recommendable!