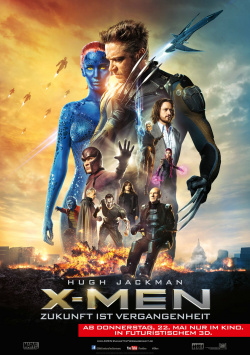 X-Men: Future is the Past

In the not-too-distant future, the battle between humans and mutants has gotten completely out of control. The Sentinels, giant fighting machines designed by Dr. Bolivar Trask (Peter Dinklage), are hunting not only the mutants, but any humans who try to help them. The result is unimagined destruction, suffering and death. There is a war going on that could mean the end of all humanity. The only chance left to avert it is to send Logan aka Wolverine (Hugh Jackman) back in time. He is to seek out the younger self of Charles Xavier (Patrick Stewart/James McAvoy) in the 1970s and get him to join Magneto (Michael Fassbender) in preventing the event that led to the construction of the Sentinels. But in the process, the fact that Magneto is in a nearly impregnable maximum security prison proves to be the least of his problems. And the time Logan has left in the past is running out, as the Sentinels have long since tracked him and the other mutants to the future.

After four X-Men movies and two Wolverine adventures, you might think that there would be no new cinematic sides to this superhero universe. But Bryan Singer, director of the first two X-Men movies, has managed to do just that. His X-Men: Future is Past can be seen as a sequel to both X-Men 3 and the reboot X-Men: First Decision. At the same time, the interweaving of two time levels reshuffles the cards entirely, allowing this franchise to now launch into a new, exciting future. And by the way, X-Men: Future is the Past has also become a really good, exciting, spectacular and extremely entertaining superhero movie, which can convince not only on a purely trick-technical level.

Surely, as with all films that deal with the theme of time travel, there are again some logic holes. The fact that Wolverine's journey to the 1970s negates some events from the earlier films might also rankle some fans. But since everything else is right, possible points of criticism are quickly forgotten. At the latest when Quicksilver (Evan Peters) is allowed to use his abilities in a great sequence during Magneto's escape from the Pentagon, even the last nagger should fall silent. Singer finds the perfect blend of action-packed suspense, gritty vision of the future, humorous '70s nostalgia and tongue-in-cheek irony. Along the way, he gives his ensemble cast, consisting of two generations of X-Men, enough room to show off some real acting chops as well.

James McAvoy as the broken and utterly disheartened Charles Xavier, Jennifer Lawrence as borderline dark side Mystique, and Michael Fassbender as a young Magneto all deliver truly great performances, which really isn't a given in a special effects spectacle of this nature. And Hugh Jackman is cooler than ever as Wolverine. You can tell that Jackman loves this character and is constantly trying to develop him. Some supporting actors, such as Pretty Best Friends star Omar Sy, Oscar winner Halle Berry, and even Ellen Page, get a little lost next to the very dominant leads. But even if for a short time the impression may arise that Storm, for example, would be completely unnecessary in this film, every single character proves in the end to be an important part of the whole, which is still very clear by the very nice, albeit only a few seconds lasting appearances of some beloved characters from the first films.

To be able to understand all the plot elements and allusions in X-Men: Future is Past, at least parts 2 and 3, as well as First Decision should be known. Those who haven't seen those films might have trouble following the action at some points. However, even without this helpful prior knowledge, the comic book adaptation is just plain fun. Singer has set the bar pretty darn high here for the upcoming superhero movies, but especially for the next appearance of the Avengers. He's directed top-notch entertainment cinema that has plenty of room for action, great special effects AND an exciting story. Clearly one of the best blockbusters of the year and therefore: definitely worth seeing!!!