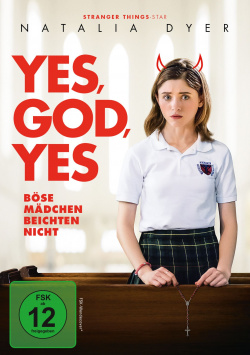 What is a teenage girl to do when the awakening of her own sexuality is opposed by a strict Catholic upbringing in rural America? This is the problem Alice (Natalia Dyer) faces, who has always been taught at home as well as at school that sex before marriage or even masturbation is a terrible sin. But where to put the lovely tingle that spreads every time Alice watches the sex scene from "Titanic"? Maybe four days at church camp will help get the sinful thoughts out of her head. But even group exercises and Bible studies won't help when Alice adores cute Chris (Wolfgang Novogratz) all day long. Is this a sure path to hell for the girl?

Director Karen Maine's feature-length adaptation of her own short film is a funny and refreshingly honest indie comedy about self-determination and female sexuality that won the Special Jury Prize for Best Film Ensemble at the 2019 SXSW Film Festival. Natalia Dyer, best known from the Netflix series "Stranger Things", wonderfully plays the somewhat naive girl who must navigate a world of bigotry and repressed feelings. She is joined by numerous other series actors and actresses, including Timothy Simons from "Veep: The Vice President", Alisha Boe from "Dead Girls Don't Lie", and Donna Lynne Champlin from "Crazy Ex-Girlfriend". They all act with an infectious joy in acting and an ease that perfectly suits Karen Maine's production.

The story, set in the early 2000s, is fairly simple-minded but hits the mark with its message. Maine portrays very well the chaotic emotional world of teenagers who just don't understand what hormones gone wild are doing to them. Spiced with a lot of humor, she succeeds in showing the emotional pitfalls on the way to adulthood without having to make use of overly crude and raunchy gags. Her film shows that sexuality is something quite natural that cannot be suppressed. Those who do this in the film supposedly in the name of their faith are only superficially happy with it. In the privacy of their own homes, however, it looks quite different. Even with this, the film comes very close to reality.

"Yes, God, Yes - Bad Girls Don't Confess" could have been a bit more biting in some places. But for the most part, the production makes up for this shortcoming with an engaging charm and the aforementioned enjoyment of the actors*. Those expecting a teen comedy a la "American Pie" may be a bit disappointed. But if you like cryptic coming-of-age comedies and appreciate American independent cinema, you should definitely give this one a look. Worth seeing!

After its scheduled theatrical release was cancelled, "Yes, God, Yes - Bad Girls Don't Confess" will be available to watch exclusively on Amazon Prime Video starting January 18. The film will be available for purchase digitally on all major VoD platforms starting January 29. The DVD and Blu-ray will then be released - also like the digital rental version - on February 05, 2021