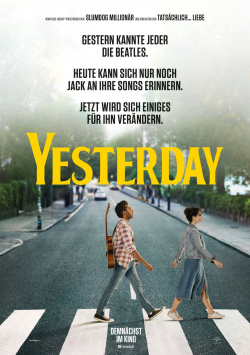 Imagine waking up one morning and you're the only person who can remember the Beatles and their immortal songs. That's exactly what happens to Jack (Himesh Patel), an unsuccessful street musician. Playing his own songs, he performs in bars and on the fringes of festivals, with only his best friend and manager Ellie (Lily James) by his side. Just as Jack decides to hang up the guitar and get a real job, he has a bike accident. When he regains consciousness in the hospital, everything seems to be as it always has been. Until Jack is given a new guitar by Ellie and he plays her Yesterday on it, which she hears for the first time. Jack thinks it's a hoax, but an intense Google search seems to confirm: The Beatles never existed and he is the only person who can remember their songs. And so he unceremoniously passes off the songs as his own compositions and becomes a superstar overnight. But will he really be able to live with this big lie?

Director Danny Boyle and screenwriter Richard Curtis have come up with a really fascinating basic idea for Yesterday. Their What If. Scenario is not only brilliant in its absurdity, but also raises some interesting questions: What would you do if you were the only person who could remember something very special? But much more interesting is the question: what makes a song immortal? The song itself or the artist who interprets it? Would the Beatles' songs have been as successful by other performers? Does good music necessarily need a particular performer to reach people?

Of course, it's doubtful that an unassuming street musician like Jack performing the Beatles' songs would cause the same hysteria today as the Fab Four did in their day. On the other hand, Ed Sheeran, who plays himself in the film and sometimes makes fun of his image, has proven that artists beyond the usual superstar cliché can inspire the masses with good music and become sex symbols. So Jack's career really isn't that far-fetched.

Unfortunately, the script doesn't really manage to get everything out of the great idea that could have been possible. Characters like the ice-cold, profit-hungry manager, for instance, are unnecessarily overdrawn clichés that only get in the way of the story's actual charm. Although the music is great, the story is beautiful, and the lead actors are likable, in the end you feel like the film lacks that final igniting spark to be truly great.

At the end of the day, Yesterday is one thing above all: an extremely charming love story that has wrapped its romantic tale in an original guise that, in addition to the usual finding the two of them to each other at the end, also has some really good gags (just sayin': The Beatles aren't the only thing that's vanished from our collective memory), delightfully whimsical ideas and plenty of great music. It's not uncommon to find yourself bobbing your legs along to the beat or singing along softly. And even if not the full potential is exploited, Danny Boyle has directed a really nice good mood film, which leaves its audience happy from the cinema. And for that there is clearly a more than satisfied: Absolutely worth seeing!

Cinema trailer for the movie "Yesterday (Großbritannien 2019)"
Loading the player ...