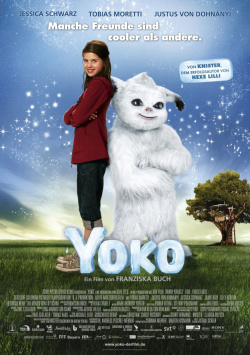 Children's book author Kinster (Witch Lili) and director Franziska Buch (Bibi Blocksberg), who is experienced in family entertainment, have teamed up to enchant little moviegoers with a very special fairy tale and have now brought the adventures of little Yeti Yoko to the big screen following the success of the book series.

Eleven-year-old Pia (Jamie Bick) is astonished when she comes face to face with a yeti in her tree house one day. The girl, who has become a complete loner since the death of her father, suspects that Yoko is a very special creature who desperately needs her help. And she's right about that, because the Yeti with the mystical abilities has come to Germany from the Himalayas by a stupid coincidence and is now being hunted by the evil big game hunter Thor van Sneider (Tobias Moretti), who wants to sell the Yeti for a lot of money to the zoo of his most important client Kellermann (Justus von Dohnányi). While Pia is at first only concerned with hiding Yoko from her mother (Jessica Schwarz) and little sister Marcella (Lilly Reulein), van Sneider has quickly figured out where his precious prey is. Pia knows she needs help to save Yoko from the hunter, so she lets her best friend Lukas (Friedrich Heine) in on the existence of her mystical friend. But are the efforts of two children enough to save a creature like Yoko far from home?

Yoko leaves a bit of an impression that the makers watched E.T. and Bigfoot and the Hendersons a little too often before filming. Some of the parallels to those films are all too obvious to pass as coincidental. But even if they could therefore be accused of lacking originality, the bottom line is that Yoko is a really nice children's movie that scores with some pretty ideas and its exciting as well as emotional execution.

As for the design of Yoko, one can be divided in opinion here. Personally, I don't like it at all and I think that more of an educational look was thought of here instead of employing a high cuteness factor, which American counterparts would have surely catered for. That there must be the for German children's films unfortunately almost obligatory children who dance hip hop are so cute insert, also disturbs a little. And also that the adults, also a bad habit of many children's films, are portrayed as completely exaggerated dorks, does not really raise the level of the film - even if the children present at the press screening were deliciously amused by this.

But apart from these points of criticism, Yoko is an adventure well tailored to its target audience, which captivates the little ones with some humor, a little everyday drama and a lot of fantasy. The beautiful theme, composed by Klaus Badelt (Pirates of the Caribbean), then adds just the right dose of emotion, which could make many a Yoko fan's eyes moist, especially towards the end. All in all, this is a nice children's movie that takes its cue from classics, but doesn't have what it takes to become one itself. But it's enough for two hours of fun. Therefore: for Yeti fans between 6 and 11 definitely worth seeing!

Cinema trailer for the movie "Yoko (Deutschland 2011)"
Loading the player ...