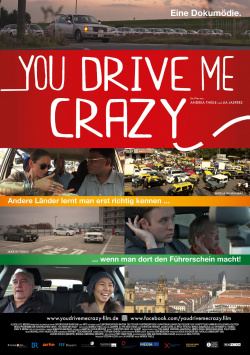 You drive me crazy

The idea is as simple as it is ingenious: Andrea Thiele and Lia Jaspers accompany three people from different nations who have to get their driver's license in countries that are foreign to them and are confronted not only with sometimes quite absurd traffic rules, but also with completely different mentalities. This very special culture clash is certainly not always easy for the driving students, but it is all the more amusing for the viewers of the documentary You drive me crazy.

The film darts with the American Jake through the streets of Tokyo, fights with the German Mirela through the chaotic traffic conditions of Mumbai and observes the South Korean Hye-Won in her attempts to meet the requirements of German traffic regulations in Munich. Of course, the sometimes very amusing glimpses of the driving lessons these three protagonists have to take only serve as a starting point to portray their dealings with foreign cultures, their lives far from home and their attempts to adapt.

This is at times very funny, at other times surprising, a little surprising or very touching. The fact that the filmmakers manage to get all of this out of co-filming driving lessons is what makes this entertaining documentary so worth watching. The moments between Hye-Won and her typical Bavarian driving instructor are among the humorous highlights of the film, as are the scenes in which Jake's very American driving style drives Japanese driving instructor Tetsuya to despair. But also when Mirela learns that it is not possible for her to rent a car in Mumbai without a driver and that she is not taken very seriously as a driving student at first, or when Jake learns that in Japan you have better chances of getting your driving license if you show up for the test wearing a tie, the entertainment value of You drive me crazy is way up there. And even during the closing credits, the viewer is given another hearty laugh when a text panel brings Mirela's story to a quite wonderful conclusion.

Andrea Thiele and Lia Jaspers have turned a simple basic idea into an entertaining culture clash documentary that works very well both as a turbulent story of three student drivers and as a portrait of cities and cultures. The Munich-based pair have blended equal parts informational content and entertainment value into an entertaining whole for which there can only be one verdict in the end: Passed

Cinema trailer for the movie "You drive me crazy (Deutschland 2012)"
Loading the player ...