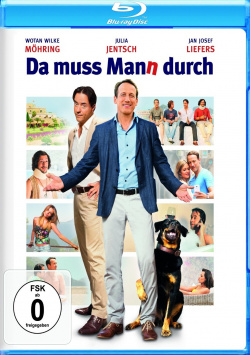 You have to go through - Blu-ray

Film: Paul Schuberth (Wotan Wilke Möhring) simply has no luck with love. While his best friend Schamski (Jan Josef Liefers) seems to get every woman into bed with just one look and even the shy Günther (Oliver Korritke) is now living in a steady relationship, Paul always falls in love with the wrong one. When he meets Lena (Julia Jentsch), the daughter of the publishing house owners Paul works for, he is sure: this time it is the woman for life. The fact that she is engaged to the wealthy Patrick (Stephan Luca) doesn't bother Paul much. And in fact he manages to win Lena's heart - which her mother (Daniela Ziegler) is not really enthusiastic about. During a holiday together on Mallorca Paul should get the chance to prove to his parents-in-law that he is a good match for their beloved daughter. But of course Paul steps from one fat little into the next. When he learns that Lena is pregnant and that Patrick, not him, is the father, he urgently needs the help of Schamski, Günther and Bronko (Fahri Yardim). But it's doubtful whether the chaos troupe really does a better job...

With "Mann tut was Mann kann" director Marc Rothemund ("Sophie Scholl", "Groupies don't stay for breakfast") in 2012, an entertaining and tangy romantic comedy, which scored particularly well with the lovable and quirky side characters and the charming happy ending. So it's no wonder that author Hans Rath and director Rothemund, together with the majority of the cast, were hired again for the sequel. However, the shooting doesn't seem to have gone that smoothly, as Rothemund has withdrawn his name from the project, so that now the non-existent Thomas Lee is mentioned as the director. In fact, it's also easy to see why the movie fails as a sequel. Therefore, you should try to evaluate the movie not only as the second part of a successful predecessor, but also as a romantic comedy in its own right. Because then the judgments turn out nevertheless very differently.

As a continuation "There must man by" is a bitter disappointment. The happy ending of the predecessor is no longer there, Jasmin Gerat's figure of the veterinarian Iris is not even mentioned anymore. Instead, Paul immediately gets back to a woman who is about to marry another man. That doesn't seem very imaginative. What's much worse is that Paul's friends are downright degraded to extras and that Jan Josef Liefers in particular is not allowed to make such biting remarks anymore, with which he made the best laughs of the movie in the first part. Here now he has to be content with dirty mobile phone photos and weak calamities. And the performances of Oliver Korritke - the only character, by the way, whose story is consistently continued - and Fahri Yardim have already been forgotten during the credits. And then there's Wotan Wilke Möhring as Paul, who seems to have forgotten every development he went through in the first movie.

But if you break away from "Mann tut was Mann kann" and take "Da muss Mann durch" simply as a harmless romantic comedy with a bit of slapstick, the movie works quite well at the end. The pictures of Mallorca are wonderful, the actors - especially Sophia Thomalla - are attractively staged and the story, as predictable as it may be, is entertaining for viewers who like this genre. And although the whole thing moves dangerously close to Rosamunde Pilcher level in many moments, there are still some jokes that at least make you smile.

No question, without such talented and sovereign actors as Jan Josef Liefers, Julia Jentsch, Wotan Wilke Möhring or even a really sympathetic Peter Prager "Da muss Mann durch" would really be nothing more than a petty little film that can find its audience in the public evening program. The ensemble and the picturesque landscape shots, which simply whet the appetite for a holiday, save a great deal. Unfortunately, it always becomes clear how much better and more funny this comedy could have been, if it had kept more of the wit and the esprit of its predecessor and dramaturgically would have focused more on further development than on regression. And that's why there is only a "Worth Seeing" here, with a few exceptions!

Picture + Sound: The wonderful landscape shots of Mallorca are also shown to advantage in home cinema. The colours are powerfully mixed and the overall sharpness is at a very high level. Even in darker scenes the many small details come into their own very well. The sound is in a pleasantly dynamic Dolby Digital 5.1 mix, which not only lets the voices sound out of the speakers in a clear and understandable way, but also provides some movement in the surround range every now and then with well implemented sound effects such as an explosive firework and the music. Good!

Extras: As a bonus there is only a short promo clip, in which Wotan Wilke Möhring leads the audience over the set (approx. 2:30 min.), as well as the trailer for the film.

Fazit: "Da muss Mann durch" is a bitter disappointment as a sequel, but in itself an entertaining and nice romantic comedy with high show values and some nice jokes. Those who don't know their predecessor and don't want to see more than entertaining entertainment without great depth, can risk a glimpse just because of the charming ensemble. However, those who hope that the level of part 1 will be maintained or couldn't laugh at the first movie should rather keep their hands off this sequel. The Blu-ray is technically absolutely convincing, but the bonus offer is extremely sparse. Altogether there is a hesitant one for the whole package only with some exceptions: Recommendable!