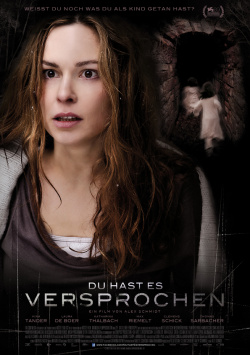 As children, Hanna (Mina Tander) and Clarissa (Laura de Boer) were the best of friends, spending every summer together on an idyllic island. But after a vacation, the girls suddenly lost contact with each other. It's not until many years later that they meet again when Clarissa, now a sought-after model, is admitted to the hospital where Hanna works as a senior physician with an overdose of pills. The chemistry between the women is immediately right again and since Hanna is about to break out of a marital crisis anyway, they decide to take a spontaneous short vacation on her island together with Hanna's daughter Lea (Lina Köhlert). No sooner have they arrived on the sleepy island than long-forgotten childhood memories are reawakened. But there are secrets that are better left hidden - and the mysterious disappearance of a girl from the village that last summer when Hanna and Clarissa were on the island together is definitely one of them.

Mystery and horror from Germany is unfortunately a rarity. It is therefore always a nice surprise when filmmakers in this country dare to tackle this subject. And so author and director Alex Schmidt deserves a lot of praise for daring to tackle a genre that is rather neglected in Germany with her feature film debut Du hast es versprochen. The fact that she was able to secure some very good actors for it, from Mina Tander to Max Riemelt to Katharina Thalbach, also sounds promising.

Visually, the mystery thriller can certainly build up an atmosphere of suspense. It's a shame that this is almost completely destroyed by the use of countless genre clichés such as the obligatory music box and extreme illogic. Surely, especially in a horror movie there shouldn't be too much emphasis on logic. But there are some aspects in the film that just don't add up to a coherent picture, and so are more distracting than helping to keep the viewer hooked to the action. It may seem a bit petty to criticize Hanna for having constant cell phone reception on the island. But since the island is portrayed as if there are hardly any paved roads and as if time has stood still here (there is no TV in the cottage, for example), it is hardly believable that here of all places - and then in the middle of the forest - cell phone reception is almost perfect. As such annoying little things accumulate, the enjoyment of the gloomy events is permanently spoiled by this.

The idea underlying the story of the thriller is not bad in itself. The purposeful use of some effective horror elements also strikes a positive note. However, in the end the successful aspects are overshadowed by the less successful elements. So in the end, even Du hast es versprochen is nothing more than a commendable, but unfortunately failed attempt to present truly exciting, original and atmospheric mystery horror cinema from Germany. Too bad!

Cinema trailer for the movie "You promised (Deutschland 2012)"
Loading the player ...