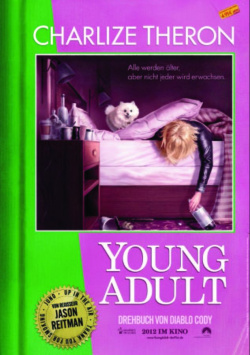 With the somewhat different teen comedy Juno, director Jason Reitman (Up in the Air) and screenwriter Diablo Cody created a little film gem that captured the problems of a girl on the cusp of adulthood in a humorous as well as true-to-life way with wonderful dialogue, sensitive staging and great actors. Now the two are preparing to repeat this success with the tragicomedy Young Adult. But this time the focus is not on a girl who suddenly has to grow up, but on a grown woman who can't come to terms with no longer being young.

Because as a teenager, Mavis Gary (Charlize Theron) was the most sought-after girl at her small-town high school. All the boys were crazy about her and her future looked more than bright. But now there is little of that left. At 37, Mavis desperately clings to the memories of her youth. Her marriage has failed and the book series she ghostwrites for will be discontinued after the next volume. Alcohol and meaningless sex are supposed to help make these failures more bearable. But when Mavis learns one day that the love of her youth, Buddy Slate (Patrick Wilson), has become a father, she has a new goal: to return to her small hometown and free Buddy from his stuffy prison. That he could be happy in this life is out of the question for her. But her plan proves to be more difficult than she thought. For Buddy simply won't respond to her obvious advances. In this predicament, Mavis finds solace in, of all people, her former classmate Matt (Patton Oswalt), now as then a crass outsider. But even Matt's good encouragement can't stop Mavis from her self-destructive scheme.

Young Adult has very amusing moments that reveal a similar genius that made Juno so special in its day. But unlike the first collaboration between Jason Reitman and Diablo Cody, their latest is much more tragedy than comedy. Mavis is an absolutely pitiful character who is hard to feel sympathy for. Pity, yes, but no real affection. Yet this is precisely where the film's very great strength lies. Because Mavis comes across as a real character, not an overdrawn movie character. She is a completely broken woman who doesn't want to face her bad decisions and therefore lives one lie after another. She can't stand the fact that other people are happy without her. And that's why she has to do everything she can to get Buddy to leave his young family.

The fact that the film nevertheless didn't turn out to be a completely depressing work is, of course, partly due to Diablo Cody's great script. The dialogue between Mavis and Matt, though always overlaid with a certain dreariness, is wonderfully funny and very well observed. And scenes like the way Mavis draws inspiration for her next book also make for relaxed smiles. The more painful it is then, of course, to have to watch helplessly as a viewer, how Mavis is heading more and more towards the abyss and she seems to be the only one not to notice this.

It's also a credit to the cast, however, that Young Adult is simply fun to watch despite its rather dark subject matter. Charlize Theron is absolutely terrific as a former high school belle on a self-destruction trip, and she's never implausible for a second. Theron carries the film, but is supported admirably by the fine supporting cast. This is especially true for Patton Oswalt, who might be known in Germany primarily as Spence from the series King of Queens. Fate has not been particularly kind to Matt either, and at times he too tries to escape reality. But unlike Mavis, he doesn't deny reality and is absolutely aware of his position in society. Oswalt embodies this character in an incredibly endearing and authentic way. And so it is then understandable for the viewer why an unusual friendship can develop between two people as different as Mavis and Matt on the outside alone, as it does here.

Who hopes for pure feel-good cinema with Young Adult will certainly be disappointed. But if you appreciate magnificently observed and wonderfully directed American acting cinema with dramatic as well as humorous moments, you should definitely not miss this film. Worth seeing