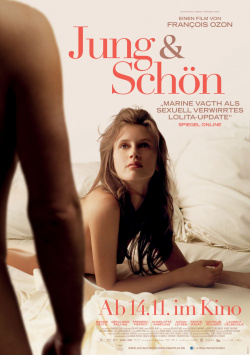 Actually, it is only curiosity that makes Isabelle (Marine Vacth) lose her virginity to her holiday fling just before her 17th birthday. The sex is completely disappointing for the girl and does not arouse any emotions in her. But it awakens a strong attraction in her, which she begins to live out in a dangerous way with the start of the new school year. Because from now on Isabelle lets herself be paid by men for her love services. While her mother (G&eacute;raldine Pailhas) and her stepfather (Frederic Pierrot) suspect nothing of the double life of the schoolgirl, Isabelle finds more and more pleasure in her secret and very lucrative sex meetings. When a tragic incident exposes her, the hitherto perfect image of her family threatens to collapse for good.

The fact that young women prostitute themselves in order to finance their expensive studies has already been the subject of several filmmakers, sometimes more, sometimes less intensively. Francois Ozon, too, seems at first glance to devote himself to this social problem with Jung & Schön. But it quickly becomes apparent that this is precisely not the case. Isabelle does get the idea of prostituting herself through a report about young female students who sell their bodies. But her motives are completely different. She comes from a well-off background, from a fairly well-functioning family. But she is at the turning point between her youth and adulthood, looking for ways to navigate the world of adolescence, which is new to her. What experimenting with drugs or drifting into eating disorders is to some, the allure of secret sex with older men who lucratively reward her for it is to Isabelle.

especially when Isabelle talks about how she felt during sex and why she kept seeing men, it becomes clear that the extremely versatile filmmaker has once again managed to direct an extremely well-observed, profound psychogram in which, once again, there is power in silence. After dealing with adolescent boys in his last work, the excellent In Their House, he now wanted to focus on girls and their difficult path into adolescence here. And he has succeeded extremely well.

The film recounts the events of an entire year, divided into the four seasons. The individual chapters are linked by thematically chosen chansons by Francoise Hardy, where it is worth paying close attention to the lyrics. Here it becomes clear how much care Ozon puts not only into the writing of the dialogues and the casting of his actors, but also into the choice of music. His films are always a perfectly choreographed interplay of many individual elements, but this is really only noticeable on closer inspection due to the completely unexciting staging.

Of course, one is tempted to accuse Ozon of only casting model Marine Vacth because she cuts a very good figure, especially in the textile-free scenes, making for a very sensual lead character that more than lives up to the title Jung & Schön. But already in the scene in which Isabelle sleeps with her German holiday acquaintance and really only feels emptiness, but at the same time says goodbye to her childish self, it becomes clear that Vacth also has a great acting talent, which she can fully play especially in the last third of the film.

So Young & Beautiful is not only further proof of Francois Ozon's versatility, but also a stirring drama about growing up, breaking away from parental care, and taking steps into a life of one's own that are not always wisely chosen. For lovers of sophisticated French arthouse cinema and the quieter films of Francois Ozon absolutely worth seeing!