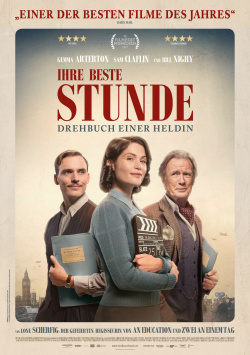 London, 1940: Desperately seeking a job to support her artist boyfriend Ellis (Jack Huston), Catrin Cole (Gemma Arterton) lands at the Information Centre. Here, she is tasked with working on scripts for propaganda films designed to give the increasingly female audience courage and hope during this difficult time. Together with the cynical writer Tom Buckley (Sam Clafin) she is supposed to turn the story of two brave twin sisters into great patriotic emotional cinema. That becomes a really big challenge, though, and not just because bombs are falling around them on a regular basis. The Ministry's stipulations, the charged chemistry between Catrin and Tom, and the big egos of actors like the legendary Ambrose Hillard (Bill Nighy) on the one hand and the lack of talent from other actors on the other keep getting in the way of the project.

With Her finest hour, director Lobe Scherfig has delivered a very accomplished mix. Her film is not only a declaration of love for the power of cinema, but also an ironic comedy about the vanities of the movie business, a tender romance and a moving war drama. Even when the tone of her production changes drastically at times, which is especially the case in the last act, the whole thing always seems harmonious. Sure, one twist in particular towards the end of the film will not please some viewers, as it takes away much of the film's lightness. But it is the wonderful ending that gives this truly drastic change of mood a fitting justification.

First and foremost, the story is marked by subtle humor of the British kind. The love story that unfolds in the sometimes very humorous setting is predictable, but beautifully realized. Even in the more dramatic scenes, things are never laid on too thick, which is why they then come across as very powerful on an emotional level. This creates a nice mix that touches the heart as well as stimulates the laughing muscles - only to then unexpectedly move you to tears. It's all carried by a great ensemble, led by a strong Gemma Arterton, supported by an as always wonderful Bill Nighy and a convincing Sam Clafin (A Whole Six Months).

Surely, Her finest hour doesn't reinvent the wheel and probably won't end up in the top spots in any best of list at the end of the year. The film entertains superbly and is wonderfully directed. But in the end, it's just too conventional to really leave a lasting impression. For a nice, amusing and moving evening at the cinema, however, the film is absolutely perfect fare. And that's exactly why there is a clear: Absolutely worth seeing!

Cinema trailer for the movie "Her finest hour (Großbritannien 2016)"
Loading the player ...