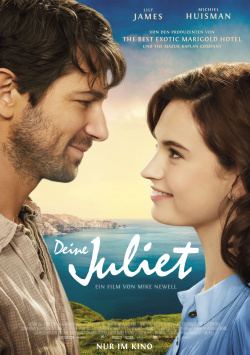 The young writer Juliet Ashton (Lily James) with her humorous stories about Izzy Bickerstaff has managed to give people some joy and lightheartedness again after the Second World War. Although further Izzy stories would bring her even greater prosperity, Juliet now wants to write something more meaningful. When she receives a letter from the farmer Dawsey Adams (Michiel Huisman) from the small channel island Guernsey, she seems to have found the subject of her new book. In his letter Dawsey tells of the book club "Guernseyer Freunde von Dichtung und Kartoffelschalenauflauf", which he founded together with some other islanders during the occupation out of necessity. This literary association has brought her through difficult times together, about which the writer desperately wants to learn more. Without further ado, she travels to the island, unaware that a story awaits her that will change her life forever…

Mike Newell has once again staged a wonderful romance with "Deine Juliet". The "Four Weddings and a Death" director has adapted Mary Ann Shaffer's bestselling novel very successfully for the cinema. He took a lot of liberties compared to the original book, but kept the core of the story and enriched it with some very nice aspects. Especially the relationship between Juliet and Dawsey is a bit different in the movie - but that's why it works out so well. Between the enchanting Lily James ("Cinderella", "Downton Abbey") and Michiel Huisman ("Forever Adeline", "Game of Thrones") the sparks are sparking, so that the viewer is immediately carried away by the tenderly developing love story.

The story told in retrospect by Elizabeth (Jessica Brown Findlay), one of the founders of the book club, brings a good portion of drama to the otherwise humorous lightness of the staging. This narrative strand arouses completely different emotions, which, however, are no less powerful. Newell succeeds very well in preparing a harmonious mixture from the rather tragic story and the charming romance, which in the end releases his audience into reality with a happy smile.

"Deine Juliet" is simply a beautiful feel-good film, which can score with a charming cast, wonderful landscape shots and a story told with a lot of heart. Yes, some of it looks badly constructed and there are also a few small lengths. But all in all, this visit to Guernsey is a wonderful break from everyday life, for which there is a clear "absolutely worth seeing"!  ]

Cinema trailer for the movie "Your Juliet (USA/Großbritannien 2018)"
Loading the player ...