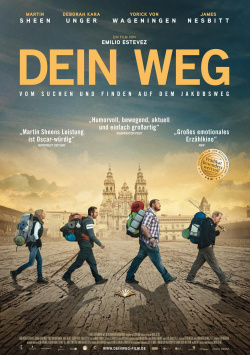 After Hape Kerkeling made the Pilgrim's Way to Santiago extremely popular and director Coline Serreau successfully sent a group of pilgrims to Santiago de Compostela in "Saint Jaques...Pilgrims in French", Martin Sheen, under the direction of his son Emilio Estevez, now also goes to the Camino de Santiago to entertain cinema-goers in an emotional and humorous way. The result may not be a real revelation, but this calm father-son collaboration is a beautiful film.

When the successful ophthalmologist Tom Avery (Sheen) learns that his son Daniel (Estevez) has died on the Way of St. James, Tom's orderly everyday life begins to waver. While Daniel could never stay long in one place and loved to travel the world, his father had never really had the desire to travel far and leave his pleasant comfort zone. But to accompany his deceased son on his last trip back to the USA, Tom flies without hesitation to Spain. When he receives Daniel's belongings there, he realizes how little he actually knew his son. In order to perhaps get even closer to him in his death, Tom decides to follow the Way of St. James instead of Daniel and scatter his son's ashes at the decisive points. A task that he actually wants to accomplish alone. But when the somewhat pushy Dutchman Joost (Yorick van Wageningen) and later the resolute Canadian Sarah (Deborah Kara Unger) and the Irishman Jack (James Nesbitt) join him, Tom realizes that loneliness is not always the best way to cope with mourning - even if his new companions sometimes get on his nerves...

"Your way" is a quiet tragicomedy, which of course lives primarily from the landscape shots along the Way of St. James. Estevez and his team have packed the moving story into images that look pleasingly little like a polished Hollywood production. Besides the picturesquely captured Camino de Santiago, the movie always works out especially well when the very different characters of the chance acquaintances Tom makes along his way interact with each other. Here the movie is full of charm and reserved humor and hits the viewer right in the heart.

However, there are always moments in between that unnecessarily prolong the whole thing and sometimes even try a bit too cramped to get some demanding depth. Especially at the beginning and during the tough finale this is rather negatively noticeable. But even if this weak point reduces the positive overall impression a little, it will be maintained in the end just because of the strong performance of Martin Sheen. The transformation Tom undergoes on the Way of St. James and the way he learns to deal with his grief and feelings of guilt is authentic and comprehensible for every viewer thanks to the often restrained play of the award-winning actor. Only in a scene in which Sheen has to bluster drunk and violin the opinion of his companions does the whole thing seem a bit contrived - which, however, could also be partly due to the German dubbing.

Although "Your Way" is an honest spiritual film, Emilio Estevez avoids beating the viewer with a too intrusive or instructive religious message, which could easily have happened with a film about the Way of St James. By allowing characters to meet who, for very different reasons, take the road to Santiago de Compostela, and by focusing more on their personalities than on their religious convictions, the film as a whole seems very reserved. The life-affirming message, which of course has a lot to do with faith in the end (regardless of whether it is a religious or a very personal form of faith), is conveyed much more intensively and is also readily received by viewers who may not have so much to do with religion.

Despite of some lengths and unnecessary hangs, "Dein Weg" is a very nice movie, which tells a story with a lot of heart and humor, which is always full of great sadness, but at the end it releases the viewer from the cinema with a smile on his face. And it is precisely for this reason that this journey on the Way of St. James can be recommended to all lovers of sophisticated entertainment films and charming arthouse comedies. Worth seeing