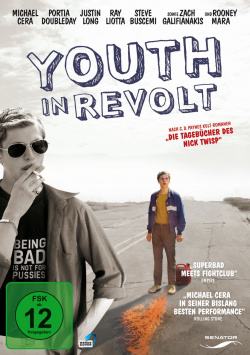 Content: Nick Twisp (Michael Cera) has a problem. It's not just that his last name is completely uncool. It's also that his nice, reserved manner and his fondness for the music of Frank Sinatra don't exactly make the teenager a born heartthrob. Actually, Nick has almost resigned himself to his existence as an eternal virgin, when he has to spend an inherently unwanted short vacation at a campsite with his mother Estelle (Jean Smart) and her unsympathetic lover Jerry (Zack Galifianakis). Here he meets Portia (Sheeni Saunders), who immediately turns his head with her direct, unconventional manner. Portia finds Nick quite nice, but not much more. Since there is at least a chance of a future together, Nick knows that he absolutely has to change something fundamental in his life. His imaginary alter ego Francois (also Michael Cera) is supposed to help him with that, through whom Nick wants to become a really bad - and therefore also interesting - boy. And at first this plan seems to work out...

With Youth in Revolt director Miguel Arteta (Welcome to Cedar Rapids) has directed an amusing coming-of-age comedy that has finally made it to Germany after almost four years. Based on the novel of the same name by C.D. Payne, which was published in Germany under the title Crazy Days, the film tells with a lot of charming humor about how difficult it is when you are not cool as a teenager, but rather shy and unimpressive. Despite a few slightly over-the-top moments, the comedy, like the book, is full of well-observed truths that even as an adult viewer you can definitely relate to.

Although Michael Cera here, at least as Nick Twisp, only slightly varies the characters he has embodied in films like Juno, Nick & Norah, and Superbad, he is simply the perfect casting for the nice nerd Nick. This is especially evident when Cera plays not only Nick, but also his alter ego Francois. Because here he can take his image ad absurdum in a really delicious way, which was clearly a lot of fun for him. The rest of the cast, especially Portia Doubleday, is also convincing with good-humored and pointed acting, through which Gustin Nash's successful screenplay adaptation of the popular novel is appropriately realized.

While the first few minutes still give the impression that Youth in Revolt is a typical teen comedy with rather raunchy humor. But this impression soon changes as the film turns into an extremely charming and, in some scenes, refreshingly unconventional comedy with whimsical wit, original ideas and clever dialogue, which fans of films like Juno or Little Miss Sunshine should thoroughly enjoy. Absolutely worth seeing!

Picture + Sound: The DVD's picture has a decent level of sharpness, which has to accept minor quality losses in the darker sequences. The colours are authentically mixed and radiate a pleasant warmth. The sound, which is available in a Dolby Digital 5.1 mix, primarily has the rather front-mixed dialogue and the well-matched soundtrack to offer, but here and there smaller surround effects provide a little movement to the action. Good!

Extras: As a bonus, the DVD has an audio commentary by Miguel Arteta and Michael Cera to offer, which comes in places a bit dry, but quite some amusing and also informative moments to offer. In addition, there are some cut scenes, additional animation sequences and just under 10 minutes of footage from the auditions of the actors. The trailer rounds out the well-arranged bonus offerings.

Conclusion: Youth in Revolt is a somewhat offbeat, but extremely amusing coming-of-age comedy, in which Michael Cera on the one hand absolutely lives up to his Juno image again, but at the same time is allowed to take it ad absurdum in a wonderful way. The film adaptation of the popular Nick Twisp books by C.D. Payne convinces with charming actors, whimsical wit and original ideas, which easily make up for some small hangs and dramaturgical weaknesses. It's nice that this film has finally made it to Germany. Absolutely recommendable