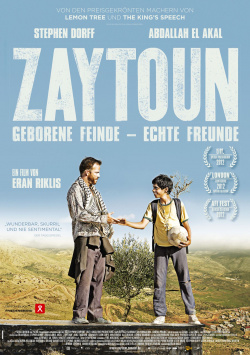 Beirut in 1982. Here, 12-year-old Fahed (Abdallah El Akal) lives with his family in a camp for Palestinian refugees. Since an early age, the boy has been told that he must hate the Israelis because they eventually drove his family from their home. But until now, things like playing soccer or selling chewing gum to soldiers have simply been more important to Fahed. That changes abruptly when his father is killed in a bombing raid. Fahed is filled with grief and anger, which is discharged in an explosive hatred of the Israelis. When PLO soldiers capture an Israeli Air Force pilot who crashed over Beirut in the attack, Fahed wants only one thing: for this man to die. But then he realizes that the captured Yoni (Stephen Dorff) is the only person who can help him fulfill his father's last wish: to plant the olive tree he so lovingly tended on the family's old property. But to do so, he must cross the war zone into Israel - and that can only be done with an Israeli soldier. And so Fahed fights his anger and hatred and makes a decision that will permanently change not only his life, but Yoni's as well.

After the renowned Israeli filmmaker Eran Riklis last rather disappointed with the drama Playoff, set in Frankfurt, due to a half-baked dramaturgy and a very bitter undertone, in his new film Zaytoun he goes back to the strengths that made works like Lemon Tree or The Journey of the Personnel Manager so successful. Here, as there, he tells of the clash of opposing characters and cultures, the defying of boundaries and the power of the human will. The whole thing is embedded in a rather restrained production in which the characters are entirely in the foreground. And here and there he loosens up the actually sad backgrounds with a little humour.

In this way Riklis lets an unusual friendship develop in Zaytoun between an Israeli soldier and a Palestinian boy - an in itself impossible friendship, which is able to assert itself against initial hatred and mistrust, but in the end is not elevated to a transfigured level, but is always credibly developed further. This is not only thanks to Riklis' direction and Nader Rizq's screenplay debut. The two lead actors also play a significant part in ensuring that the friendship between Fahed and Yoni has been transported to the screen in such a stirring manner.

It is particularly surprising that Riklis has hired a Hollywood actor like Stephen Dorff to play Yoni. But Dorff, who has worked with such directorial greats as Oliver Stone, Michael Mann and Sofia Coppola, puts in a very understated and utterly convincing performance here, perfectly matching the acting of his young co-star Abdallah El Akal (Miral). The fact that Dorff has no Israeli background whatsoever, but hails from Atlanta in the American state of Georgia, is quite quickly forgotten.

Zaytoun is certainly not Eran Rikli's best film. It simply doesn't come close to the quality and intensity of Lemon Tree or The Syrian Bride. But it's still a very accomplished drama about breaking down the walls in our minds, a moving story about friendship and how important it is for people to have something they can call home. A film worth seeing for everyone who is interested in the cinematic reappraisal of the conflict between Israel and Palestine

Cinema trailer for the movie "Zaytoun (Israel/Großbritannien 2012)"
Loading the player ...