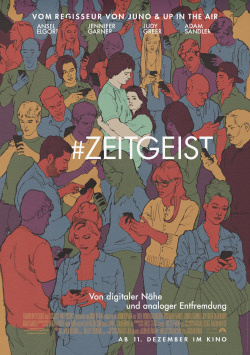 In a time when everyone is connected to everyone else via the Internet, when it is more important to have more friends on Facebook than in real life, when people measure their popularity by YouTube clicks or WhatsApp messages, loneliness in our society is greater than ever. In the marriage bed, only the iPad and not the body of the spouse is caressed. Young people communicate with each other all day without really saying anything to each other and therefore often feel completely left alone with their real problems. And instead of really noticing our surroundings and enjoying the important things in life, we run through the hustle and bustle of everyday digital life with our eyes lowered to our smartphones. The phenomenon of the lack of real communication and real closeness in a connected world that supposedly offers us every opportunity is at the heart of #Zeitgeist, the latest film from Jason Reitman (Juno, Up in the Air).

Based on the cult novel Men, Women & Children by Chad Kultgen, the film delves into the lives of seven families in a small suburb of Austin, Texas. These are lives that seem to run independently alongside each other, where boys escape into the fantasy world of World of Warcraft, a frustrated father seeks sexual fulfillment via Internet pornography, and an overly anxious mother tracks her daughter's every move via cell phone tracking and Internet spy software, while another markets salacious photos of her daughter on the Web. At first glance, this family's daily lives only superficially overlap at moments. But in the end, it becomes apparent that real life is sometimes even more interconnected than the virtual world.

#Zeitgeist manages to convey its message very well in many moments in a sometimes humorous, sometimes emotional way. The acting performances are on a very high level, whereby it is particularly pleasing that Adam Sandler finally gets to show again that he can deliver really strong performances in serious roles. But also Jennifer Garner as a mother with an exaggerated need for control or the young actors Ansel Elgort (Fate is a rotten traitor) and Kaitlyn Dever (Justified, Bad Teacher) make the film on the acting level a real treat. This is intensified by the script in many places. Because the dialogues are sometimes extremely clever and also very humorous, whereby the often heavy story is pleasantly loosened up.

Also at the imagery and the accompanying soundtrack there is nothing to complain about. Especially through the combination of images and music Reitman succeeds quite brilliantly in some moments to reveal the emotional world of his characters to the audience. It's exactly these scenes that show the potential of the subject matter and the book. Unfortunately, Reitman is only able to fully exploit this potential in places. His biggest problem is that he allows too many lengths, by which any dramaturgical intensity is diluted badly. Certainly, each plot line has its strengths, which have enough room to unfold in a novel of over 300 pages. But compressed into a running time of just under two hours, some deeper aspects must inevitably be shortened or omitted altogether, which then leads to the fact that intrinsically interesting themes such as the plot line around Donna (Judy Greer), who wants the big career for her daughter Hannah (Olivia Crocicchia) a little too much, or the one around a boy who is so jaded by Internet pornography that he is no longer receptive to real tenderness, seem somewhat superficial.

Jason Reitman has directed an absolutely ambitious film that has many great moments and plenty of food for thought. But in the end, it becomes clear that less - both in terms of running time and the number of storylines - would have been significantly more here. Who can overlook the small weaknesses and tough moments, but gets a magnificently acted, visually first-class staged and dramaturgically highly interesting drama, for which there is then in the end still a clear worth seeing!