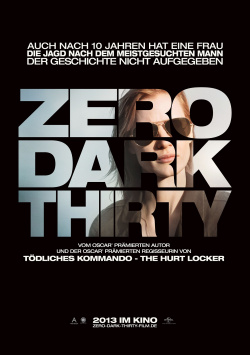 After the huge artistic success of Deadly Command - The Hurt Locker, which made her the first woman ever to win a directing Oscar, Kathryn Bigelow is now following up with Zero Dark Thirty. Her controversial thriller tells a sober and at times almost documentary-like story of the tedious hunt for Osama bin Laden, which was marked by bureaucracy, bad decisions and political stumbles. The story, based on true events, centers on young CIA agent Maya (Jessica Chastain), who is thrown into the middle of the war on terror without much experience. At the beginning she seems to have moral reservations against torture, which she keeps to herself, but as time goes by bureaucratic narrow-mindedness drives her downright insane. While her superiors seem to be twiddling their thumbs and allowing themselves to be used as pawns of politics, Maya is determined to finally find bin Laden and bring him down, no matter what the cost.

Zero Dark Thirty, named after the military time 0:30 when the Navy SEALS' mission began that led to bin Laden's killing, feels very realistic. Based on interviews with people involved in the operation and intensive research, journalist Mark Boal, who previously wrote Deadly Command - The Hurt Locker, has written a script that seems to reflect the work of the CIA and the Navy SEALs very realistically. However, it should be remembered that Kathryn Bigelow's film is not a documentary, but a mixture of facts, half-truths and fiction. The filmmaker doesn't want to make any judgements, she wants to present aspects like torture, political calculations or military special operations in a sober and factual way and leave it up to the viewer to make his own interpretation and moral judgement. Especially at the beginning she succeeds very well. When Maya is first confronted with the torture of a prisoner who allegedly possesses important information that could lead to the whereabouts of Osama bin Laden, one believes to see shock and disgust in the young agent's gaze. It seems as if Maya is virtually set up as an identification figure for the viewer. But this impression disappears as soon as her colleague leaves Maya alone with the tortured man and he asks her for help. Her reaction is extremely sobering and reveals that Bigelow just doesn't make it that easy for the viewers and forces an opinion and special point of view on them.

In the last third of the film, however, the neutral distance, which is one of the film's strengths, softens somewhat. True, the storming of the house where bin Laden was hiding, as well as his killing, is staged in an almost documentary fashion. But Bigelow also allows herself some dramatizations in this sequence that look more Hollywood than reality to me. Admittedly, she does without the pathos and the exaggerated patriotism that Act of Valor, for example, displayed. Still, the lines between good and evil are drawn pretty clearly in this scene only. Sure, the Navy SEALs involved in this mission are quiet heroes, as they are not allowed to go public, but they are heroes. The film leaves no doubt about that. It really only questions whether killing bin Laden will really change anything.

What bothers me a bit about this last part of the film is that it somehow doesn't quite fit with the sober look Bigelow takes at much of the investigation. It also wouldn't make sense to be overtly critical of the US's actions here, since Maya, the film's mouthpiece, is a CIA agent in heart and soul who would never openly question her country's methods. But by having the Navy SEAL sequence take an unambiguous stand in some ways, the neutrality of the beginning also loses a little credibility.

Craft-wise, Zero Dark Thirty is beyond reproach. The actors are all very good - although I personally find the Oscar nomination for Jessica Chastain a little overrated - and the production has very intense, tense and gripping moments to offer time and time again. But since the film is not a documentary and it is not clear what is fact and where Hollywood fiction has crept in, the film offers no real new insights. So what is the point of it all? To discuss the use of torture? To talk about whether terrorism can really be contained by killing leading figures? To show that the fight against terrorism is primarily fought at desks and behind closed office doors? All well and good, but that just doesn't make Zero Dark Thirty the important and exposing film that many critics want it to be. Kathryn Bigelow has definitely succeeded in making a good political thriller, without question a worthy, albeit somewhat weaker successor to The Hurt Locker. But the whole thing is not the quite great masterpiece that tells the whole truth about the capture of bin Laden. For lovers of good US political thrillers and such viewers who are interested in the subject matter and want to join the discussion about the film is Zero Dark Thirty then nevertheless: worth seeing!