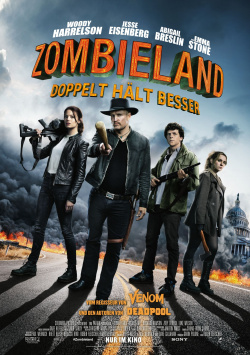 Ten years have passed since Columbus (Jesse Eisenberg), Tallahassee (Woody Harrelson), Wichita (Emma Stone) and Little Rock (Abigail Breslin) joined forces as a community of purpose in the fight against the zombie apocalypse. By now, they've made themselves at home in the White House and are living a relatively relaxed life. For Little Rock, however, this is too boring in the long run, which is why she takes off one day. Wichita, feeling somewhat constrained in her relationship with Columbus, sets out to find her sister, leaving the two men alone. For Tallahassee, now is the time to get back on the road as well. Too bad nerd Columbus is on his back about it, and he's got a new partner in naive Madison (Zoey Deutch) by his side, who's sawing at Tallahassee's nerves with every word. Soon the question is what's worse: Madison, or the zombies, who have also evolved dangerously over the past decade.

Ten years ago, Ruben Fleischer scored a minor cult hit with his directorial debut, Zombieland. The call for a sequel came pretty quickly then. A few years ago, there was already an attempt to return to Zombieland with an Amazon series. But the pilot failed with the audience, so the project was not continued. Director Ruben Fleischer, on the other hand, held on to wanting to make a theatrical sequel if he could manage to get the entire cast back in front of the camera. After a long time, he has now actually succeeded.

You may now wonder if too much time has passed. The genre is now badly overused and also the surprise effect, with which the predecessor could score, is missing in Zombieland: Doppelt hält besser. Sure, the concept always works on the second go-around when it takes its cues from the original. But whenever the film tries to kick it up a notch, it all feels too forced to work. As a result, the humor often just falls too flat and makes for tired smiles rather than hearty laughter.

This is evident with the new character Madison, for example. The idea behind it is quite nice, the implementation on the other hand just doesn't quite want to ignite. And so the survival dummy just seems annoying in the long run. But even if this sequel can not quite meet the expectations of the fans, there are still enough moments in which the quality of the predecessor is at least touched, with especially Woody Harrelson and Emma Stone are responsible for the strong moments of the zombie comedy. And another tip: don't jump up and flee the cinema at the end credits, as there's another reunion here with a particularly popular cast member from Part 1! Not a new cult movie, but still worth seeing!