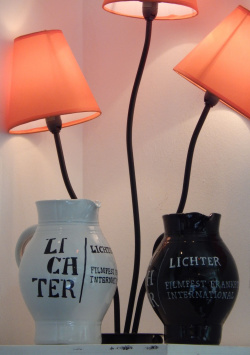 Directors from the whole region celebrate film premieres at LICHTER

The LICHTER Filmfest Frankfurt International celebrates its anniversary! The tenth issue will be launched in 2017. Over the years, the once small, regional festival has developed into a nationally important film festival, which not only film lovers but also filmmakers enjoy coming to Frankfurt to attend. The success of the LICHTER Filmfest is primarily due to the enormous lifeblood that the filmmakers invest year after year in the financially and time-consuming implementation. Driven by their love of cinema, film and the region, they have been putting together an extremely varied programme between high standards and entertainment for over a decade now, often offering a platform for smaller, less commercial films.

Truth and Virtual Reality on the occasion of the tenth anniversary

The anniversary issue from 28 March to 2 April is all about "truth". In addition to international and regional films, a new series on the future of German film, roundtable discussions and exhibitions on the theme of the year, LICHTER 2017 is organizing a virtual reality competition. The patron is Doris Dörrie.

Over 100 films and events await visitors to the 10th LICHTER Filmfest at the Künstlerhaus Mousonturm and other cinemas in Frankfurt and the region. On the opening evening Doris Dörrie talks about the truth claim of film. "Doris Dörrie's films are studies of reality and searches for truthfulness," says festival director Gregor Maria Schubert. "We are happy that one of the most distinguished German filmmakers has enriched LICHTER and supported us in our search for truth in film and society." On 29 March LICHTER honours the director with a Carte Blanche. Dörrie presents her current film Greetings from Fukushima.

18 international feature-length films, including four German premieres, and the accompanying programme focuses on very different dimensions of truth: "In the competition for the LICHTER International Feature Award there are ten feature and documentary films," explains Deputy Festival Director Johanna Süß. "The films in the international series ask questions about the truth of memories (By the Time it Gets Dark), stage Kafkaesque judicial trials (I Am Not Madame Bovary), tell of clever impostors (Nuts!) and mythical legend makers (The Last Passenger), or show women in the USA fighting against the truthkeepers in state and church (Jackson). In the opening film The Distinguished Citizen, the inhabitants of an Argentine provincial town do not want to distinguish between poetry and truth. What follows is a hunt for life and death.

The discussion rounds of the accompanying programme take place in cooperation with the Cluster of Excellence "The Formation of Normative Orders". Philosophers and cabaret artists, defence lawyers, scientists and activists search for truth in times of populism, media scolding and conspiracy theories. A humorous tone is set by the discussion group In Vino Veritas. We pour clean wine! on. An exhibition of the whistleblower network portrays courageous advocates of truth from Hesse.

As the first film festival in Germany, LICHTER 2017 is hosting a storytelling competition for virtual reality films. A jury of experts selected five 360° films from over fifty submissions. The finalists come from Russia, Germany, France, Ireland and Canada. "VR technology gives filmmakers new possibilities, but at the same time presents them with great narrative challenges. With the competition we want to give the young genre a platform and invite our audience to a shared VR experience," says Gregor Maria Schubert about the new LICHTER segment. With VR glasses, the audience dives into underwater worlds, sets off on a foray through Dublin or plays along in music videos. The winner of the LICHTER VR Award will be announced at the award ceremony on 30 March at 5 pm. In addition to the competition, international experts will exchange their experiences with telling stories in virtual worlds at a conference organised by ZDF Digital I VR-Lab. In addition, filmmakers can get to know tools for the production of VR content at a two-day trade fair.

In the new series Future German Film, LICHTER presents selected highlights of the German film landscape. Tiger Girl and the self-criticism of a bourgeois dog are two Berlinale highlights on the programme that prove how courageously and experimentally young German directors are currently working. "Especially among young filmmakers there are many talents who unfortunately are completely lost in the home cinema. In Frankfurt, we want to offer them visibility and access to an enthusiastic audience," says Johanna Süß. Vanatoare and Marija deal with women living at the subsistence level, whose dreams of a better future meet the destructive reality.

Founded ten years ago as a platform for regional filmmaking, LICHTER also brings the diversity of Hessian filmmaking to the screen in its anniversary edition. Not only Wiesbadener Kultkneipen (Sylvi´s Bumerang) and big city lovers in love (world premiere: Hard & Ugly - eine Liebesgeschichte) compete in the regional competition for the White Bembel, the feature films and short films also take the festival visitors to Italy, Armenia and Namibia. In the German premiere A Gravame - The Steelworks, Death, Mary and the Mothers of Tamburi, the inhabitants of a southern Italian city suffer from the biggest steelworks in Europe. The documentary Denk ich an Deutschland in der Nacht portrays the formative figures of the regional techno scene: Ricardo Villalobos, Roman Flügel, Ata and Move D. Ghostland - the view of the Ju/`Hoansi, awarded the Hessian Film Prize 2016 for best documentary, accompanies Namibia's indigenous peoples on a journey to Frankfurt am Main.

video artists and filmmakers have submitted over eighty works for the 7th edition of the LICHTER Art Award. The spectrum ranges from documentaries and film essays to fictional narratives. This year, all finalists come from Germany - according to curator Saul Judd, proof of the current quality of the works produced by the German video art scene.

Festival Centre is, as last year, the Mousonturm Artists' House in Frankfurt. studioNAXOS hosts the LICHTER Art Award, the ZDF Digital I VR-Lab and the Virtual Reality Screenings. Other films can be seen at long-standing LICHTER partners: at Mal Seh´n Kino, at the cinema of the Deutsches Filmmuseum, the Wiesbadener Filmbühne Caligari and the Lederpalast in Offenbach. For the first time the MMK Museum für moderne Kunst is the venue.