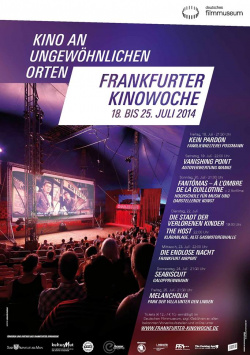 Equally two films to spook you in one evening and in the sewage treatment plant - one of the seven unusual places that the 18th Frankfurt Cinema Week from Friday, 18 to Friday, 25 July will turn into a cinema: In an old gas engine hall on Tuesday, July 22nd, the spectators immerse themselves in the bizarre macabre world of Jeunet's CITY OF LOST CHILDREN (FR/DE/ES 1995). Afterwards, in the Korean cult work THE HOST (KR 2006), a big city is haunted by a horrible and bizarre mutation monster from the sewage system.

Frankfurt is rich in "unusual places": Since 1995, the series of events of the German Film Museum has transformed more than 90 spots in the city with a screen and mobile cinema technology into film theaters of an extraordinary kind. Cult strips and arthouse films are successfully staged here. The programme of the 18th Frankfurt Cinema Week also shows the metropolis on the Main in all its diversity. Guided tours as well as special culinary and cultural offers prepare the audience for the film experience and the location on the respective event evening. But no matter how many places and ideas it offers, a project like the Frankfurt Kinowoche can only be realized with the necessary financial means. In the fall of last year, these came together to a significant extent via the crowdfunding portal startnext.de, as Claudia Dillmann, Director of the Deutsches Filmmuseum, joyfully emphasized once again at the press conference on Monday. The financing action was part of kulturMut, an initiative of the Aventis Foundation. "We're delighted that the contributions of numerous supporters amounted to 7,000 euros. With an additional financial injection of 13,000 euros from the Aventis Foundation, the financing target of 20,000 euros was reached and the search for unusual locations began for 2014. Many thanks to the Crowd and to Aventis'', says Dillmann.

The latter attached great importance to emphasizing how important it is for the Kinowoche and the Deutsches Filmmuseum "to always open up unusual places beyond the city centre". So this time with Sindlingen, Niederrad and Rödelheim many districts outside the centre are integrated into the programme.

Family businesses such as the Possmann wine press, where the public can once again experience the recently deceased Heinz Schenk next to Hape Kerkeling in KEIN PARDON (DE 1993) in his best form, or the Manke car sales company, in whose backyard VANISHING POINT (USA/GB 1971), one of the most influential road movies in film history, is shown, are just as much a part of the programme presented by project manager Johanna Ruhl as public places: This year visitors can cheer on the US-American racehorse legend SEABISCUIT (USA 2003) at the traditional racecourse in Niederrad. Ruhl said she was particularly looking forward to this "great-photographed, star-studded film, which will be shown on a huge air screen with a view of the skyline". DIE ENDLOSE NACHT (DIE ENDLOSE NACHT, BRD 1963) at Frankfurt Airport shows Hannelore Elsner in one of her first cinema roles.

Film and concert form a Gesamtkunstwerk in the Great Hall of the Hochschule für Musik und Darstellende Kunst, when five music students improvise live as a silent film band on the story of the super villain FANTÔMAS - À L'OMBRE DE LA GUILLOTINE (FR 1913). The cinema week with Lars von Trier's MELANCHOLIA (DK/SE/FR/DE 2011) comes to an end in the beautiful park of the neo-baroque villa Unter den Linden. But unlike in films, there is no doomsday mood here - because the next cinema week will definitely come!