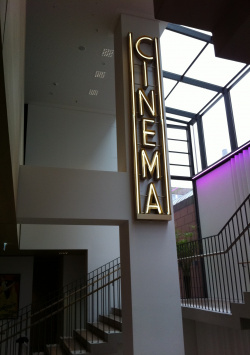 Accompanying programme to the special exhibition FILMTHEATER in February

Open screening room - A look behind the scenes of the cinema

Open screening room - A look behind the scenes of the cinema

How does the film get onto the screen? What tasks does the projectionist have to accomplish in order to project the image and sound of a film in the best possible quality? For all those who would like to watch a film projectionist at work, there is the opportunity to do so in February and March at the German Film Museum. In the "Open screening room" offer, presenters show where the projectors rattle and hum and explain the various devices and film formats. For almost a century, showing films was an art in itself: inserting film spools, threading films, fading from one projector to another, rewinding film spools, gluing torn film strips - all of this requires a good eye, fine motor skills and maximum concentration. In the meantime, the profession of film projectionist is dying out. In the large cinema chains, which now exclusively project digitally, the films are recorded via computer and start and end times can be programmed. With the demonstrators, their know-how and craftsmanship also disappear. In the Film Museum this knowledge is kept alive.


Film series for the exhibition

In the film series for the special exhibition FILMTHEATER. Cinema photographs by Yves Marchand and Romain Meffre (26 November 2014 to 31 May 2015) in February and March are about a look behind the scenes of cinema operations. Under the motto "Behind the screen", the focus is on those who make the film experience possible for the audience in the first place: In addition to cinema operators, cashiers and admission staff, the main focus is on film projectionists. Precisely because this profession is in danger of being lost in the Western world, the series pays tribute to its achievements with films about projectionists. While the screeners in the feature films are often portrayed as dreamy loners, the documentaries draw an unembellished yet loving portrait of the profession. Pre-films include silent film pearls from the archive of the EYE Filminstitut in Amsterdam.

Friday, February 6th, 6 p.m.; Saturday, 14 p.m. February, 23:30pm
THE SMALLEST SHOW ON EARTH The world's smallest show
GB 1957 R: Basil Dearden
D: Peter Sellers, Margaret Rutherford, Bernard Miles. 80 min. OF
A young married couple inherits a dusty, run-down little cinema together with its eccentric and doddery staff: a confused usher, a ticket taker and former silent movie pianist as well as a drunken film projectionist. To increase the selling price of the building, the couple tries to get the business up and running again.
Supporting film: THE GO TO THE Nuts. DE 1992. R: Klaus Stawecki. 35mm

Saturday, February 7th, 20:30; Friday, 13th, 2011 February, 18h
BÁJEČNÍ MUŽI S KLIKOU The wonderful men with the crank
ČSSR 1978. R: Jiří Menzel
D: Rudolf Hrušínský, Vladimír Menší, Jiří Menzel. 84 min. 35mm. OmU
Jiří Menzel's comedy takes place around the turn of the century in Bohemia: A film projectionist travels from place to place and dreams of opening a fixed cinema in Prague. He allies himself with a young cameraman - played by Jiří Menzel himself - who in turn has a dream: He longs for true-to-life films that deal with the reality of people.
Supporting film: CINEMA FILM SHOWNERS IN PAKISTAN. CH 1973. R: Sebastian Schroeder. 3 min 35mm. without D.

Wednesday, 11. February, 20:30 hrs
NUOVO CINEMA PARADISO Cinema Paradiso
Italy/France 1988 R: Giuseppe Tornatore
D: Philippe Noiret, Jacques Perrin. 123 Min. OmeU
The news of the death of an old friend triggers intense memories of a famous director's childhood in post-war Sicily. As a young boy, his friendship with Alfredo, the old screenwriter of the village cinema that gave the film its title, led him to develop a passion for film that would shape him throughout his life. Giuseppe Tornatore's semi-autobiographical declaration of love to the cinema as a place of dreams was awarded the Oscar® for Best Foreign Language Film in 1990.

Prelude: A NEW APPARATUS FOR THE PREVENTION OF KINOBRÄNDEN. DE 1912. Commercial. 3 min 35mm

The film follows over three years the project of director Marcus Vetter and many volunteers to rebuild a dilapidated cinema in Jenin, Palestine, as a cinema and cultural centre. The way there is long and full of obstacles. There is a lack of money and one has to struggle with mistrust and bureaucratic barriers, but patience pays off: the cinema, which was built in the 1960s and closed in 1987 when the first Intifada broke out, reopens in August 2010. CINEMA JENIN has been awarded the Peace Prize of German Film.

After the boom of multiplex cinemas in the last two decades of the 20th century, the following lecture will be given Since 2010, a return to traditional film theatre has been evident since the beginning of the twentieth century (for example with the advent of the Astor Film Lounge premium cinemas), which at the same time recalls the great era of cinema palaces in the 1920s and 1930s. One reason for this is the renewed awareness of a central factor around the dark cinema box, namely the aesthetic unity of interior space, urban space and architectural external impact. In a richly illustrated lecture, Alfons Maria Arns describes the history of film theatres and current developments in German and American cinema architecture, and shows how fundamentally important and multifarious the "dream houses of the collective" (Walter Benjamin) were and still are as places of public experience.

Alfons Maria Arns (*1954) is a freelance cultural, film and cinema historian and co-partner of Drummer
and Arns Historiker GbR www.drummerundarns.de

With its lavish architecture, the Kings Theater promised its viewers in New York a first-class film experience. Two years after its closure in the late 1970s, MEMOIRS OF A MOVIE PALACE gathers contemporary witnesses, from the manager to the projectionist to the usher, who report on the heyday of premiere cinema at their former workplace.


Wednesday, 25. February, 20:30
COMRADES IN DREAMS - LEINWANDFIEBER
Germany 2006 R: Uli Gaulke
Documentary. 100 min. 35mm. OmU
The film focuses on the operators of four cinemas in North Korea, India, Burkina Faso and the USA. The conditions under which they carry out their work could not be more different. But the four stories are connected by the common dream to share the love for the films with the audience.

The documentary offers an insight into the life of the 60-year-old projectionist Alois Gugutzer. Towards the end of the silent film era Gugutzer inserted films in projection apparatuses for the first time, in the course of his career he also presented them in travelling and soldier cinemas and experienced the cinema boom as well as the slow cinema dying after the war. At the time of shooting, Gugutzer was working at a cinema in Munich.

Behind the silent movie screen is a selection of short films from the collection of the EYE Filminstitut in Amsterdam as well as a classic: Buster Keaton plays in SHERLOCK, JR. the projectionist of a small-town film theatre who tries his hand at detective work. In order to win the hearts of his beloved, he wants to locate the thief of a pocket watch stolen from his father. In a famous scene he falls asleep watching a film and in his dream enters the cinema screen.

All further information at: http://deutsches-filminstitut.de/filmmuseum/