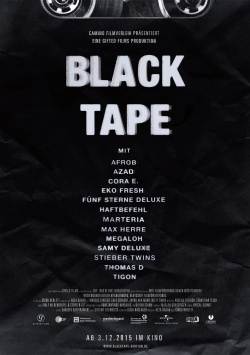 Blacktape - Tickets for preview and party to win

Sékou Neblett, director and former member of the band Freundeskreis, embarks on a journey to the roots of German hip hop together with the controversial former Royal Bunker boss Marcus Staiger and hip hop veteran Falk Schacht. The trio gets to the bottom of the relevance of German rap to pop culture and language and looks for its origin. They come across a mystery of the hip-hop world, of which nobody knows exactly whether it ever existed...

Director Sékou Neblett gathers and interviews in BLACKTAPE the Who‘s Who of the German hip-hop scene and delivers a successful portrait about the origins of a subculture that developed out of an attitude towards life. Together with Marcus Staiger (with the Royal Bunker Label Wegbereiter des Berliner Straßenraps and journalist VICE, among others), Falk Schacht (journalist, among others) VIVA, label operator and HipHop connoisseur), Max Herre, Thomas D, Afrob, Azad, Eko Fresh, Fünf Sterne Deluxe, Samy Deluxe, arrest warrant, Megaloh, Stieber Twins, Jaybo aka Monk, Steve Blame, Neffi Temur and many others, Neblett remembers the time when German HipHop originated. On his cinematic journey, he traces the mystery of Tigon, who is said to have set the stone rolling. More and more, the effects and thus the relevance of HipHop on German pop culture - its language and musical development - become visible.

One of the most extraordinary music documentaries of the year will be personally presented by the makers in selected cities. Director Sékou Neblett, Falk Schacht and Marcus Staiger present their film BLACKTAPE On Thursday, 3.12.2015 at 22.15 at the Cinestar Metropolis followed by a party at the Zoom Club.

For the movie screening and the following party we raffle

All you have to do is to get us to 02.12. at 12 noon send an e-mail with your name and the subject BLACKTAPE to gewinnspiel-ffmtipp@trifels.de .

We will inform the winners by e-mail until Thursday morning!

More information about the film can be found under: http://www.camino-film.com/filme/blacktape/

Cinema trailer for the movie "Blacktape - Tickets for preview and party to win "
Loading the player ...