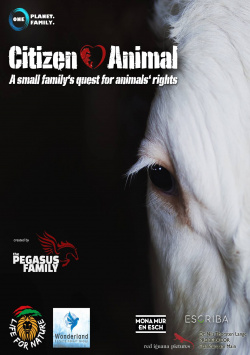 We all love animals. We're surrounded by them. Whether we live in the city or in the country.

The Pegasus family are mother Tatjana, father and director Oliver and their 4 year old daughter Bonnie. She travels over 10,000 kilometres through Europe to give a voice to the animals of this world. Their task: to find answers to the questions of the animals. On their journey, they meet Dr. Jane Goodall (Behavioral Researcher and UN Peace Ambassador), Paul Watson (Sea Shepherd), Edmund Haferbeck (PETA), Dr. Antoine F. Goetschel (Global Animal Law), Christa Blanke (Animals' Angels), Katharina Kuhlmann (Author, Vegan Confectioner and PETA Ambassador) and many others who are committed to empathic and respectful living.

CITIZEN ANIMAL is an entertaining family movie that shows that everyone can do something for a better animal life. CITIZEN ANIMAL does not want to teach or prescribe. In the film, the voice of the animals poses questions that are then answered by humans. A dialogue develops between the animals and us, in the course of which the spectator is encouraged to think for himself, to expand his consciousness and - sometimes uncomfortable - to allow questions to arise.

On April 26 CITIZEN ANIMAL will be shown at Cinema Arthouse Kino Frankfurt at  20.30. What is special about this screening is that after the screening there will be a moderated panel discussion with the guests present: Oliver Kyr (director), Dr. med. vet. Madeleine Martin, Patroness (Hessian Ministry for the Environment, Climate Protection, Consumer Protection and Agriculture), Brigitte Sommer (Chairwoman, Association for Wolf Protection in Germany), Nadia Primc (Doctors against Animal Experiments e.V.) Simone Peters (Doctors against Animal Experiments e.V. local group Frankfurt Rhein Main).

The event takes place in cooperation with the foundation "Life For Nature".

The film is brought to the cinema by JIP Film and its distributors. JIP Film und Verleih GbR was founded in August 2017 by Julia I. Peters and Jutta Feit in Frankfurt/Main. The focus is on the production and distribution of entertaining and sophisticated cinema documentaries and feature films in the arthouse area.

More information about the film can be found at: http://citizenanimal.de/?lang=de