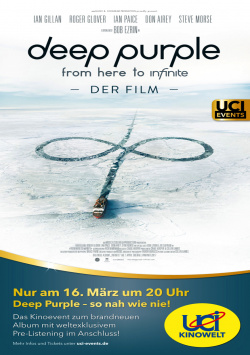 Deep Purple exclusively at the cinema

Nationwide cinema premiere of the film "From Here To inFinite" on 16.03. at 20 o'clock
Düsseldorf premiere in the presence of Ian Paice and Roger Glover

Three weeks before the official release date of the new Deep Purple album "inFinite" UCI EVENTS and Cinestar will present their new album "inFinite" at the 16. March at 8 p.m. the film "From Here to inFinite" as a cinema premiere on the big screen. In addition to deep insights into the work and living together of the rock legends, for the first time there will be world exclusive songs from the eagerly awaited album. Tickets are now available.

Deep Purple are among the first and most influential representatives of hard rock and heavy metal, have sold more than 130 million albums in their 50-year turbulent band history and were only accepted into the Rock and Roll Hall of Fame in 2016. Their last album "NOW What?!" charted on #1 in Germany and reached gold status with over 100,000 copies sold. Before the rock legends go on a big farewell tour in May, their 20th studio album "inFinite" will be released on April 7th by earMUSIC, the eagerly awaited successor to the worldwide charter success "NOW What?!

UCI and Cinestar present the film about the genesis of the album as a cinema premiere on the big screen.

"From Here To inFinite" accompanies the five legendary musicians on their moving journey to Nashville to record their new album... and once again find out that the power of music and friendship will never end. Never before have Deep Purple cameras been so close as in this film...

Fans not only get an intimate insight into the life and work of a band that wrote music history with their work, but also the unique chance to hear songs from the brand-new album for the first time and exclusively for the world.

UCI and Cinestar will show the cinema premiere of Deep Purple's "From Here To inFinite" with exclusive pre-listening on March 16 at 8 p.m. in the original English version with German subtitles.

In Frankfurt the film will be shown at CineStar Metropolis. All infos HERE