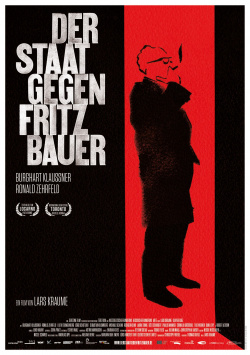 The premiere will take place on Friday, October 02 at Cinema.

The significance of the Hessian Attorney General Fritz Bauer for the Auschwitz trials of the 1960s is undisputed. But it was only after his death that his decisive contribution to Eichmann's capture became known. Grimme prizewinner Lars Kraume (THE COMING DAYS) draws with THE STATE AGAINST FRITZ BAUER the powerful and captivating portrait of a courageous man and his struggle for truth and justice. Bauer unswervingly put his finger into the wound and did not shy away from uncomfortable questions from the Adenauer government. Burghart Klaußner (ELSER, DAS WEISSE BAND) embodies the title character congenially down to the finest details of facial expression and gestures. For the other roles in his haunting portrait of the late 1950s, Lars Kraume assembled a top-class German ensemble of actors with Ronald Zehrfeld (BARBARA), Sebastian Blomberg (ZEIT DER KANNIBALEN), Lilith Stangenberg (DIE LÜGEN DER SIEGER) and Jörg Schüttauf (SO GLÜCKLICH WAR ICH NOCH NIE).

zero one film produced the film together with the Kölner Terz Film under participation of WDR, HR and ARTE. DER STAAT GEGEN FRITZ BAUER was supported by the Film- und Medienstiftung NRW, the Hessische Filmförderung, the Filmförderung Hamburg Schleswig-Holstein, the FFA and the DFFF.

The State Against FRITZ BAUER celebrated its world premiere at the Festival del film Locarno and was subsequently awarded the renowned Audience Prize.