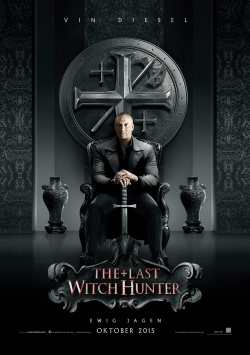 Finally it's there: the epic main trailer to the fantasy action spectacle THE LAST WITCH HUNTER, not only awaited by Vin Diesel fans worldwide. From October 22, Vin Diesel, as an immortal witch hunter, will mercilessly hunt down Kaulder in the sign of "Axe and Cross" with his flaming sword, the most evil witches in film history, led by their unscrupulous queen (Julie Engelbrecht).

In the ultimate war between our world and the next, he receives unexpected support from the good witch Chloe, played by "Game of Thrones" star Rose Leslie. Together they lead the fight that began 800 years ago to the end according to Kauler's motto: "Live forever. To hunt forever."

Kaulder (Vin Diesel), one of the last witch hunters of today's world, has to protect New York from destructive forces. The immortal hunter does not quite voluntarily join forces with Chloe (Rose Leslie) in order to put a stop to the countless witches and sorcerers, who do their mischief under the rule of the wicked witch queen (Julie Engelbrecht). These seem to reproduce threateningly, after they have already killed a large part of the witch hunters. Soon it's all up to the unequal duo to stop the growing army of witches and their queen for good...

Director Breck Eisner already taught us the fear of THE CRAZIES. Now with action star Vin Diesel (FAST & FURIOUS film series) he has found the perfect cast for the tough witch hunter Kaulder. "Game of Thrones"-wildling Rose Leslie embodies the good witch who takes up the fight against witch queen Julie Engelbrecht (NAPOLA - ELITE FOR THE LEADER) at Kaulder's side. In further roles are to be seen: Elijah Wood (THE LORD OF THE RINGS), Ólafur Darri Ólafsson (known as the odd helicopter pilot from THE FIRST-AUNICAL LIFE OF THE WALTER MITTY) and the incomparable Michael Caine (THE DARK KNIGHT film series).

Cinema trailer for the movie "Epic main trailer for THE LAST WITCH HUNTER "
Loading the player ...