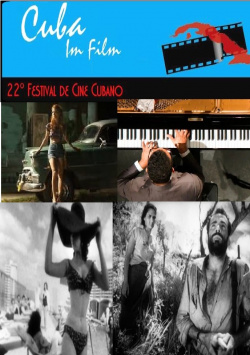 estival CUBA IM FILM from 11. to 20. May in Filmforum Höchst

For the 22nd time this year from 11 – 20 May the Festival Cuba takes place at the Filmforum Höchst in Frankfurt, the only one of its kind in Europe.

In cooperation with the 3rd World House, twelve feature and documentary films as well as eleven short films will be presented. As part of the festival, the short film prize “Junger Cubanischer Film“ will be awarded to Yimit Ramírez on 17 May for his film METAPERROS.

The other guests this year are Luis Alberto Garcia, “the face of Cuban film“, who is represented in three films, the director Lester Hamlet (YA NO ES ANTES) and the young director Patricia Ramos (EL TECHO).

Up to the new film by Fernando Perez, which was premiered at the Berlinale, all films in Germany are partly European premieres.

This year's focus “Cuba from Outside“ will be on Cuba with films that show how great the interest of European and American intellectuals and filmmakers was in the transformation of Cuban society in the early years of the revolution.

As always, the Hüften will be swung to live music again this time. At a salsa party with the group Tumbao Cubano.

The Gäste and some films will also be shown in Hamburg (Kino 3001), Berlin (Babylon), Saarbrücken (Kino 8 ½) and Weiterstadt (Koki) as part of a tour of the festival.

Migration and return, cultural differences between those who left and those who stayed at home: this is the background film for Lester Hamlet's YA NO ES ANTES, who will open the festival. In Havana, he won the Audience Award at the New Latin American Film Festival, and starring Luis Alberto García received the Best Male Leading Role Award.

Patricia Ramos presents with EL TECHO in an amusing way representatives of a young generation who try to familiarize themselves with the new possibilities for small self-employed people. Her first long feature film was very well received by the audience in Havana.

The internationally best known Cuban filmmaker Fernando Pérez is unfortunately unable to present his latest film ÚLTIMOS DÍAS EN LA HABANA at the Filmforum due to filming. After its premiere at the Berlinale, the film will now be presented at the Cuba Festival.

The music films PLAYING LECUONA by Pavel Giroud and Juanma Villar Betancourt about Ernesto Lecuona, the father of Cuban music and CUBAJAZZ by the Brazilian Max Alvim about the young generation of jazz musicians in Cuba, are a clear must not only for music lovers.

Füfor the short film award endowed with 500,- € “Young Cuban Film“, graduate films of the renowned film schools EICTV in San Antonio de los Banos and the Facultad de Arte y Medios de la Comunicación Audiovisual (FAMCA) of the Universidad de las Artes (ISA) were up for selection. The prizewinner and a 60-minute programme were selected by students from the Rhine-Main University of Applied Sciences in Wiesbaden. With its broad spectrum of topics, it shows very different aspects of Cuban society.

This year's focus “Cuba from Outside“ will once again be on Cuba with films that show how great the interest of European and American intellectuals and filmmakers was in the transformation of Cuban society in the first years of the revolution.

At the beginning of the 1960s, Jean Paul Sartre, Simone de Beauvoir, Marguerite Duras, the actor Gérard Philipe, the filmmakers Armand Gatti, Joris Ivens, Jean – Luc Godard, Chris Marker and Agnès Varda travelled to Cuba to name but a few. In her 1963 documentary film SALUT LES CUBAINS, based on her photographs, Varda told of the everyday life of Cubans, of a vibrant Havana, of the vivacious physicality, the sugar cane harvest, and with a slightly ironic undertone of Fidel Castro's speeches in fascinating images. The positive aspects of the Cuban revolution were also underlined by the German director Theodor Christensen in his 1964 film ELLA, in which he addressed various aspects of the situation of women in Cuba, including their involvement in the militias. During this time Christensen worked closely with Cuban filmmakers such as Sara Gómez.