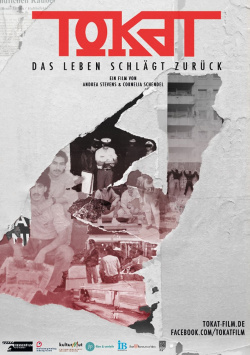 with subsequent film talk with

City Councillor Sylvia Weber, Director of Education and Integration - patron of the film

The new series "Frankfurt Previews" will show films in which the city of Frankfurt am Main plays a role. This series is intended to strengthen Frankfurt as a film location and underscore its image as a modern, international, cosmopolitan city. The premiere of TOKAT - DAS LEBEN SCHLÄGT ZÜCK marks the beginning of the series. Not only does the film's subject matter have a strong connection to the city of Frankfurt, the Main metropolis is also the centre of life for the directors and headquarters of JIP Film & Verleih.

Kerem, Dönmez and Hakan belonged to infamous youth gangs such as Turkish Powerboys, Lamina or Club 77 in Frankfurt in their youth in the 90s. Drug trafficking, drug-related crime, fighting - their reputation spread rapidly, not least due to coverage in local and national media. Dönmez: "We spent 10,000 DM in one night, that was nothing - nobody thought about tomorrow".

Since then more than 20 years have passed and Kerem, Dönmez and Hakan have grown up. There are hardly any parallels between their lives:  Kerem's health has been destroyed due to his drug use at the time. He's retired early. Dönmez had himself deported to Turkey, is a father of a family and has found a good job. Hakan was deported to Turkey, works as a field worker at the foot of Ararat Mountain and no longer has citizenship. He is thus also incapable of action in Turkey.

With Tokat - Life strikes back, a multi-layered film has been made in which the ambivalence to the "underworld" - rejection and fascination - has an effect.  It touches us to get to know the men, some of whom are still heavily marked by their youth. Tokat is more than a film about the lost youth in gangs - it shows how it can end without any social dreaming. Tokat literally means "baking pipe".

You can also find more information under: http://www.tokat-film.de/