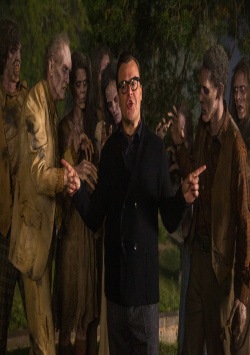 Next year Jack Black will teach all cinema fans how to be frightened in a very amusing way. Because the title of his new adventure comedy is program: GÄNSEHAUT!

Teenager Zach Cooper (DYLAN MINNETTE) is not exactly thrilled when he has to move from a big city to a small town. But when he meets the beautiful Hannah (ODEYA RUSH), who lives in the house next door, and quickly finds a good friend in Champ (RYAN LEE), he sees a first silver lining on the horizon. But every silver lining also has a cloud. And von Zach appears when he discovers that Hannah's mysterious father is none other than R.L. Stine (JACK BLACK), the author of the successful "goose bumps" novels. As Zach learns more about his strange neighbor family, he realizes that Stine has a dangerous secret: The creatures that made his stories famous are real! Stine protects his readers from them by locking them in their books. One day, however, when Stine's creatures are accidentally released from their manuscripts and escape, Zach's life takes a bizarre turn. In a crazy night of adventure, Zach, Hannah, Champ and Stine must join forces to save the city. They have to put all these fantasy creatures invented by Stine - including Slappy, Shadow Girl, the Garden Gnomes and many others - back into their books where they belong.