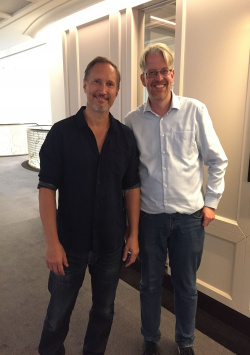 "Intrigo - Death of an Author" - Benno Fürmann and Co. guest in Frankfurt

With "Intrigo - Death of an Author", the first of a total of three film adaptations based on short novels by the Swedish bestselling author Håkan Nesser will be released in our cinemas on 25 October. To receive the Frankfurt Book Fair Film Award for Best International Book Adaptation, leading actors Benno Fürmann, author Håkan Nesser and Daniel Alfredson, director of all three "Intrigo" films, were in Frankfurt and talked to us about the exciting cat-and-mouse game between two writers.

For Alfredson, who had already filmed two novels of the "Millenium" trilogy by Stieg Larsson in one piece, shooting three films was a great challenge. He explains laughingly that he could not blame anyone for that either, because after all that was his idea. But it has also brought a number of advantages. For example, certain locations could have been used for several films and the crew could have been held together in the same way, which made shooting a lot easier. Alfredson and his co-author Birgitta Bongenhielm have worked on the adaptation for about two years with interruptions. These interruptions did the script a lot of good," Alfredson is convinced, "because this way the story and its multi-layered characters could have matured slowly.

Håkan Nesser himself was also involved in the script development process. "I trust the filmmakers who adapt my books," says the bestselling author. "I'm not a director. I don't know what needs to be changed to make a written story work in a movie." He is not satisfied with all the film adaptations of his books so far, Nesser tells us, but he is enthusiastic about the three "Intrigo"-films. The length of the short novels is perfectly suited for being transferred as a film, as not too much has to be omitted for this. Nevertheless, "Death of an Author", which he wrote twenty years ago, is told quite differently in the film than in the book, even though the core of the story has remained the same.

Other than in many other Nordic Noir films the exciting atmosphere should not be created by the pictures, but by the story and its characters. The locations that Alfredson found in a long search in four different countries almost had postcard quality, according to Nesser. On the other hand, the protagonists and their abysses are all the more interesting, especially David, whose complexity makes him so interesting. According to Nesser, Benno Fürmann transferred this very well to the screen.

It was these different sides of David that made the game so challenging for Benno Fürmann. "It was emotionally exhausting in some scenes," said the actor, "but in a great way. I can't imagine reacting like David does, but I can understand the source of his actions." This understanding then serves as the basis for a very individual interpretation of a character who is not really sympathetic to you, but who embodies a side of us that everyone recognizes in some way. He adds with a laugh: "It would be boring if I only ever played myself."

What he would particularly like about the film is the subtle way in which the story - and the story in the story - is told. "Not everything is served to the viewer on a tray and a lot of things are bubbling in the background - I really like that kind of thing."

"I want people to have to lean forward and not lean back," Daniel Alfredson told his lead actor. Benno Fürmann is convinced that this is exactly what he has achieved by leaving the audience plenty of room for their own interpretation. This refers not only to the storylines, but also to the characters themselves. David's ignorance of his wife's fate makes it impossible for him to deal with his guilt. This makes him much more interesting as a character, but also his actions, than would have been the case with a more direct, more obvious narrative style.

Since the subject of books and writing are central themes in history, we were naturally also interested in whether Benno Fürmann had ever thought of writing a book himself. He'll totally enjoy it, he'll tell us. He himself always had the pencil at hand quickly, because he was of the opinion that a written idea was a clearer, more precise idea. But it hasn't been enough for an entire book yet. But who knows, maybe at some point the fragments will become something holistic. "And then we'll meet again in Frankfurt for the Book Fair," he promises with a smile. Until then we are looking forward to further convincing performances of the sympathetic actor.

"Intrigo - Death of an Author" will be shown in cinemas from 25 October. You can find our detailed film review HERE