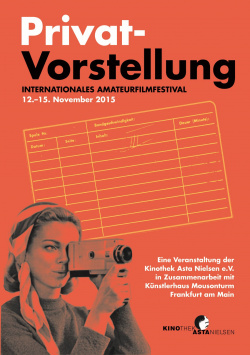 From November 12 to November 15, 2011 November the Kinothek Asta-Nielsen in cooperation with the Künstlerhaus Mousonturm brings the amateur film of the celluloid epoch to light and offers rare insights into former private recordings. The international and regional films from the 1930s to the 1980s captivate not only with their cinematic staging and documentation, but also with the technique and aesthetics of the material. As far as possible, the original formats Normal 8, Super 8 and 16 mm are used for projection.
Thanks to the support of national and international archives, a diverse program was created that explores the span between home movie and underground and with which the films, once shown in a private setting, now find a concrete audience again. Four days during which a film world of its own will be opened, admired and explored.

The Austrian Film Museum Vienna will focus on the staging and transformation of gender roles with four films from the years 1959-1975 - from female facial care to nappy-changing husbands of the 1950s. Presented by Paolo Caneppele (archive director) and Raoul Schmidt (film archivist). With the long-term project Revisiting Memory, the Cinematheque Cairo poses highly topical political questions about the ownership and interpretive sovereignty of collective memory. The film program gives an insight into the project and the amateur film stock of the Cinematheque Cairo. Presented by archivist Yasmin Desouki. In addition to the open workshop on shooting, cutting, screening and preserving with David Landolf and Brigitte Paulowitz, the Kinemathek Bern will also be showing three amateur films in which women took the camera into their own hands. Brigitte Paulowitz is film restorer and director of the film collections, David Landolf director of the Kinemathek / Lichtspiel Bern. And some punk can't be missing: The Werkstattkino München revives the legendary Berlin club in the early 1980s with So war das S.O.36.

The film programme is framed by selected context events. Carina Lesky (Ludwig Boltzmann Institute for History and Society) presents the adventure of everyday life. The Archaeology of Amateur Film. The publication published by the Austrian Film Museum in 2015 is the first in the German-speaking world to provide an overview of current archive-based research on European amateur film. Whether daily newspapers and shoe boxes, biscuit tins and wooden boxes, cardboard boxes and banana boxes - every collector or film amateur seems to have developed a personal, free-spirited theory of the packaging system for long-term preservation. The exhibition Die Amteurfilmschachtel des Österreichischen Filmmuseums Wien presents the most dazzling pieces from her collection. Curated by Paolo Caneppele and Raoul Schmidt.