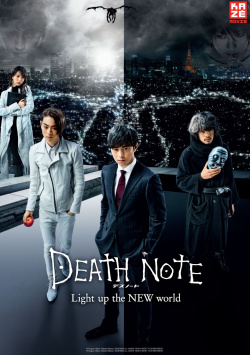 From the 04. century onward May at the cinema - in Frankfurt at the CineStar Metropolis

The saga continues!  In the latest film of the Death Note series, the past is reopened - with new actors, new Death Notes and new rules! From the director of I Am a Hero.

Kira is back! Ten years have passed since the death of model student Light Yagami. At that time he was the first Kira to frighten the world - but now mysterious deaths are once again piling up around the globe. However, not only Kira has resurfaced, Interpol also feels threatened and sends a private detective, L.'s successor, to Japan. This time there are six different Death Notes in circulation, those books with which you can kill people by note. Soon a hot battle breaks out for the supremacy of the deadly notebooks....

With "Death Note - Light up the new World", the third Japanese film adaptation of the successful anime comes to German and Austrian cinemas.

Cinema trailer for the movie "The Asia Night 2018 presents: Death Note - Light up the new World "
Loading the player ...