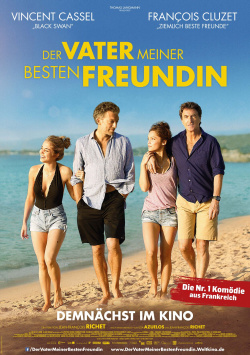 The father of my best friend - trailer for French summer comedy

Finally vacation! Louna and Marie want to pick up boys on the beach of Corsica and party for nights on end. The only problem is, your fathers are in on it. While Louna's father Antoine only has strict rules, Marie's dad is relaxed. Laurent also makes quite an impression on Louna in other ways. One evening she finally seduces him on the beach. For Laurent it was just a slip, but Louna is head over heels in love. When Antoine gets wind that his daughter has slept with an older man, he tries to find out who the man is by all means. He asks Laurent of all people for help.

In this cheeky summer comedy about friendship, love and weak moments, a very well laid-out Vincent Cassel acts at the side of the BEST FRIENDS star François Cluzet and the two charming up-and-coming talents Lola Le Lann and Alice Isaaz. Summer feeling guaranteed!

Cinema trailer for the movie "The father of my best friend - trailer for French summer comedy "
Loading the player ...