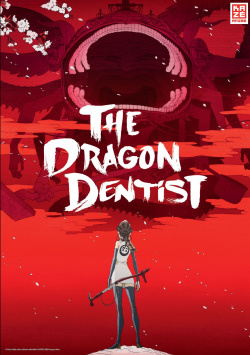 In an alternative world, wars are fought on the backs of mighty dragons, big enough to carry whole battleships. These dragons are strong enough to turn the tide in wars, but they have a single weakness - their teeth. Nonoko is a newly appointed dragon dentist and has the task of protecting the dragon, the guardian of the land, from bacteria in the tooth cavity.

One day, after fierce fighting with the neighboring country, Nonoko finds an unconscious young soldier from the enemy country between the dragon's teeth. His name is Bell and he was resurrected by the dragon from inside his teeth - a phenomenon that, according to legend, occurs before a great catastrophe. Nonoko and Bell go through a series of fierce battles and have to learn to accept their fate.

THE DRAGON DENTIST is a new work by Studio Khara, founded by former contributors of the famous Studio GAINAX around Hideaki Anno. Anno, creator of the legendary anime series Neon Genesis Evangelion and the monster hit Shin Godzilla, was himself involved in the film in several capacities.

Directed by Kazuya Tsurumaki, who has been involved in all Evangelion titles since the original TV series as director and also directed the GAINAX cult series FLCL. Scriptwriter Yoji Enokido (Bungo Stray Dogs) also wrote the scripts for Neon Genesis Evangelion and FLCL.

Die KAZ&Eacute; Anime Nights have been taking place regularly on the last Tuesday of each month since 2015 and will be extended by further seasons if the cinemas are interested. Initially started with 40 cinemas, in 2020 over 250 cinemas in Germany, Austria and Switzerland will regularly take part in the screenings.

Cinema trailer for the movie "The KAZÉ Anime Nights 2020 present: THE DRAGON DENTIST "
Loading the player ...