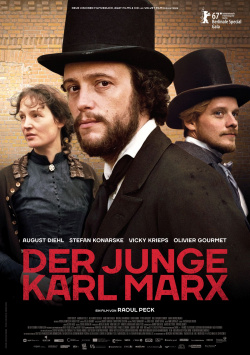 The historical feature film THE YOUNG KARL MARX by the award-winning director Raoul Peck will celebrate its premiere on Thursday, 02 March 2017 at 20:45 in Cinema. Angel actor Stefan Konarske will be present and available to answer questions from the audience.

The film celebrated its world premiere at the 67th Berlin International Film Festival and will be distributed by Neue Visionen in cinemas throughout Germany on 2 March 2017. THE YOUNG KARL MARX starring August Diehl, Stefan Konarske and Vicky Krieps. Other roles include Alexander Scheer, Hannah Steele, Olivier Gourmet and Michael Brandner.

DER JUNGE KARL MARX is great historical cinema about the encounter of two great minds who wanted to change the world and overcome old society. In large pictures and with great sensitivity, director Raoul Peck tells the story of the creation of a world-famous idea as a portrait of a close friendship. He succeeds in taking such an intimate and precise look at German intellectual history, which has not been so fundamentally shaken by two brilliant and shrewd minds since the Renaissance.

On the same day, politician Janine Wissler presents the historical feature film at 19:45 at the Mal Seh'n Kino in Frankfurt am Main as a prominent godmother. Janine Wissler, born 1981, is a member of the Hessian parliament and leader of the parliamentary group of the left. Since 2014 she has been one of the four deputy chairmen of the Left Party at federal level. Before the performance Janine Wissler will say a few introductory words about Karl Marx.

in the presence of Janine Wissler

in the presence of leading actor Stefan Konarske

More to the film you can find out under: www.der-junge-karl-marx.de