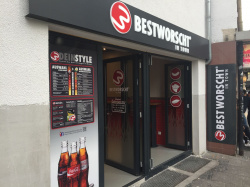 BEST WORSCHT IN TOWN gets growth

Lars Obendorfer, Frankfurt's "Godfather of Worscht", expands his empire: From now on there is a new branch of BEST WORSCHT IN TOWN in Schäfergasse 38 - the seventh in Frankfurt and the sixteenth in total. Whether in Grüneburgweg, the cradle of BEST WORSCHT, on Berger Straße, on Hanauer Landstraße or now in Schäfergasse - Lars Obendorfer's Currywurst is cult far beyond the borders of Frankfurt and Obendorfer himself is already a small celebrity with great media presence. But why is that? Currywurst is everywhere - and BEST WORSCHT IN TOWN doesn't offer more than currywurst with bread and chips.

But the recipe for success is not the what, but the how! Because currywurst doesn't taste as good as it does here everywhere. It starts with the side dish. Anyone who talks about BEST WORSCHT will quickly start raving about the extremely tasty bread. Juicy sourdough and a dark baked crust make the farmer's bread from the traditional bakery Huck a real pleasure. The crispy French fries are also extremely tasty, even if they can't really keep up with the bread. It speaks clearly for the quality of the delicious side dish if it remains in such a way in the memory that one is asked again and again where one can buy the BEST WORSCHT bread then.

However, Obendorfer also attaches great importance to quality when it comes to sausages. Without the addition of artificial flavour enhancers, the roast and beef sausages are made according to an old family recipe - and of course always fresh. The sausages are refined by different curry variants, which can be spiced up by different degrees of sharpness. And this is another secret of BEST WORSCHT IN TOWN's success: guests can put together their own currywurst according to their individual preferences. Whether Old School and without additional sharpness or as Jamabaya, Honey-Love and Pirate with sharpness degrees from "Bissi Tingle" to "Godfather`s Deathkiss" and "FBI" with felt 1.200.000 SCU, here is really the right one for every taste.

The new store is completely in the style known from other stores: simple, but modern and appealing. Tiled and painted in the typical BEST WORSCHT colours, with a sales counter in the middle and two standing counters on the sides. During our visit we were served very friendly and well advised. And after two bites it was once again confirmed that the name is the program here. Simply delicious!

The new branch can be found at Schäfergasse 38, near Konstablerwache.

All further information about the other branches and the offer of BEST WORSCHT IN TOWN can be found under: http://www.bestworschtintown.de/

Royale chocolate creations at ConditCouture
How to enjoy whisky best