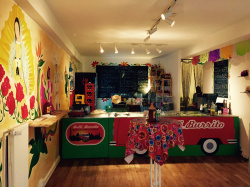 Update: The branch in Sanhofpassage unfortunately closed again on 25.03.! In the Varrentrappstr. you can still enjoy the burritos!

If you think of Mexico, you often think of things like Chili con Carne or Sierra Tequilla - things that are rather unknown in Mexico itself. For Ivan Chumacero, owner of Bulli Burrito, it is important to bring the real Mexico closer to his guests - at least on a culinary level. At first he tackled this with his cosy restaurant in Bockenheim and the Bulli Burrito Food Truck. And it worked so well that not only a special edition of Kabel 1's show "Mein Lokal, Dein Lokal" certified him that he offers his guests the best burritos in town. And his delicacies are also so well received by his customers that Chumacero expanded last year and opened a second branch in the middle of the city.

The menu at Bulli Burrito naturally includes burritos, those large wheat tortillas filled with Mexican rice, beans, cheese, a filling and a salsa of your choice. As a filling there is a vegetarian variant as well as Pollo (chicken marinated with Mexican spices), Cochinita (pork with spices from the Yucaton), Chipotle (minced meat) or Barbacoa, a special grill meat from Latin America, which is cooked slowly for many hours. In addition, there is salsa, which for Chumacero is the real secret of seasoning. If you don't like it that hot, you can choose Salsa Verde. Whoever loves fiery food, on the other hand, chooses Salsa Roja. As an alternative there is of course Guacamole.

All these ingredients are served here alternatively also without tortillas in a bowl or as a salad. In addition there are Mexican Craft Beer or soft drinks. The atmosphere in both shops, but especially in the restaurant in Bockenheim, which can also be rented for parties, is very friendly and cosy. The burritos are pleasantly spicy and you can taste that fresh ingredients are used here. Whether for the small hunger in between or as a satisfying main meal, a visit to Bulli Burrito is always recommended!