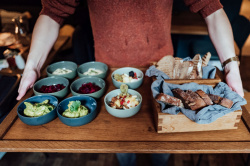 Frankfurt is an exciting city. Historical, architectural, cultural and especially culinary. However, discovering the diversity offered by the gastronomic sector is not that easy. Often you have two or three favourite restaurants that are visited regularly. Often there is no opportunity to get to know new things. Or you simply don't know which culinary highlights are hidden just around the corner. But now there is a new opportunity to broaden the culinary horizon in Frankfurt. Because the successful Hamburg start-up Taste Tours prepares itself after cities such as Hamburg, Munich, Berlin and Cologne now also to conquer the Main metropolis.

The concept of the Taste Tours, which Malte Steiert, founder of Foodguide, started approximately one year ago in Hamburg, is simple, but ingenious: maximally 7 participants explore 4 announced Gastro stops in 4 hours. You do not only get to know nice people and surprising (taste) experiences. The locations also offer interesting insights into their history and the preparation of their delicacies. And in the end you're not only saturated but you've also learned that in such a colourful city like Frankfurt it's worth looking outside the box.

For the launch of Taste Tours Frankfurt we accepted the invitation to take part in one of these culinary safaris through our beautiful city ourselves. Where the taste journey goes, one learns only during the tour. This is led by a guide who explains the concept, talks about the individual locations and breaks the ice between the guests. At a meeting point, which is announced in the days before the booked tour, the participants gather and can have a sniff at each other with a first drink. Then it's on to the first stop of the tour in a spacious Mercedes V-Class large-capacity sedan. This may well take a while in Frankfurt's after-work traffic, but the time can be used to get to know the evening's comrades-in-arms a little better.

Our first stop was the Argentine restaurant OJO DE AGUA. In the listed building near the stock exchange, Managing Director Maximilian Graf von Saurma welcomed us to introduce us to the Wine & Beef Kontor. Already during a small guided tour through the basement, where we could admire a beautiful wine cellar and a part of the historical Staufen wall, it became clear with how much passion Maximilian Count of Saurma manages his restaurant. Whether he tells of the history of the house, which has always had something to do with food, or of his first encounter with the legendary "Yello" musician Dieter Meyer, with whom he brought his OJO DE AGUA to Germany, or of the interior of the restaurant, everything is filled with an infectious enthusiasm.

We were served the OJO starter plate with palm hearts with tomato truffle chutney, spicy Iberico de Bellota ham, hand cut beef tatar and parmesan pieces. There was also a taste of the tender fillet, which is prepared here in a special oven using the low-cooking method. A pleasure!

And already the first 45 minutes of the tour were over and it went on to Dribbdebach. In the Sachsenhausen bridge district the Peruvian Dino Vallas awaited us in his restaurant LA PREFERIDA. At the Peruvian "national drink" Pisco Sour the former teacher told us how he got to the small restaurant by chance. In 2015, after ten years in Frankfurt, he opened "La Preferida" in Portugal. When he visited Frankfurt in 2017, he met a restaurateur in Wallstraße who offered to take over his premises. And so he opened a second "La Preferida" in the beautiful Frankfurt bridge district without further ado. 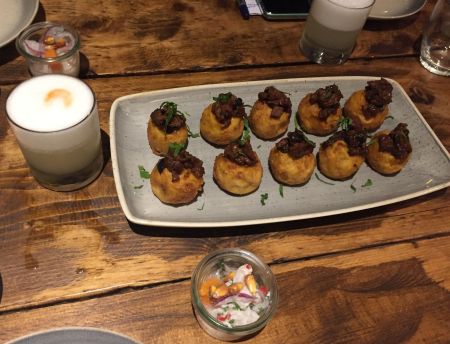 Here he wants to offer his guests authentic cuisine from Peru - without much frills. The guest room is almost puritanically designed, but nevertheless radiates a pleasant cosiness. Not only the extreme friendliness with which we were welcomed here, but also the extremely delicious food that we were allowed to taste, inspired us. In addition to spicy ceviche (raw fish with fresh lime juice, red onions, sweet potatoes and corn), the Papa Rellena, lightly fried mashed potato balls with beef, the Causa de Atun (mashed potato balls with tuna with avocado in Nikkei sauce) as a starter for loud "Mmmmhhmms…" provided. With the main courses we were allowed to try the creamy chicken dish Aji de Gallina and the Tacu Tacu de Carne with a good sauce to put in. Then we quickly realized: We'll be back!

For the third stop in the gastro the TASTE TOURS bus drove us to Eckenheim. Here Nir Rosenfeld offers in his KULI ALMA vegan cuisine from Israel. Especially the meat fans among the tour participants were not exactly enthusiastic about this announcement. But what was served up to us here in an extremely charming ambience quickly convinced every skeptic. Besides some appetizers like hummus with pita bread, cauliflower with chives aioli or an Israeli salad with challa bread, it was above all the delicacies on the rich main dish that astonished and enchanted us all. Whether vegan kebab, hot chraime or spicy oyster mushroom skewer - there was one taste explosion after the other. Nir Rosenfeld told us that his chef attaches great importance to using only very special spices. And the way he does that is just brilliant.

Although we were well saturated after this stop at the latest, we were very sad that the tour was almost over. But there was one more station. Then we went to a bar to say goodbye. More specifically, the EMBURY BAR in the shadow of the Commerzbank Tower. Here, somewhat away from the busy Kaiserplatz, Dominik Falger has created a very pleasant retreat from everyday stress, where he offers his guests a selection of first-class spirits comprising around 1,200 bottles. While enjoying delicious alcoholic and non-alcoholic cocktails, Falger told us about a speciality of his bar: ice cream. In the in-house ice laboratory, crystal-clear ice blocks are produced over a period of three days, which are then shaped by hand or with a chainsaw. His ice, which dilutes the drink much less by the high density, is also sourced from other hotels and bars at it.

The bar offered with its delicious cocktails and its cosy atmosphere the perfect conclusion of an all around successful tour. These were, however, only four of the more than twenty locations - and the trend is rising - that TASTE TOURS in Frankfurt visit. Here you can really discover the gastronomic diversity of our city. And no fear: Incompatibilities or important eating habits (e.g. renunciation of alcohol, lactose intolerance or vegetarian eating habits) can be indicated when booking and will of course be considered accordingly.

The tour costs 89€ - including food & beverages selected by the restaurateurs at every stop plus supply of alcoholic and non-alcoholic beverages during the trip. Good food, nice people, relaxed trips to the individual locations and a very nice care by your guide - all this makes every cent of the costs worthwhile here. The tour is also perfect as a gift or as a small team event.

Further information such as the participating restaurants and bars can be found here: https://frankfurt.tastetours.de/

Sunday brunch in LugInsLand
Culinary short trip to the Orient in the LUX - experience ..