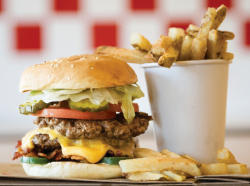 The announcement has already made unexpected waves. "We ourselves were surprised by the enormous feedback in the social media networks," reveals Jörg Gilcher, head of FIVE GUYS in Germany. Founded in 1986, the family business from the US state of Washington has now opened its first Burger branch in Frankfurt. Although the burgers have so far mainly existed in the east of the USA and only since a few years also offshoots exist in Great Britain, France and Spain, The news that the FIVE GUYS burgers will soon also exist in Germany has generated a lot of positive feedback in the social networks. This is a confirmation that the decision to expand to Germany was absolutely right, Gilcher said. The high expectations of the many FIVE GUYS fans were also met with the first Germany branch.

Frankfurt has the honour of opening the first FIVE GUYS branch because of the attractive location offered here with the former rooms of the traditional perfumery Kobberger. Located directly at the Hauptwache, the branch offers space for around 200 guests in its bright, inviting rooms. If everything goes according to plan, an outdoor terrace will be added in summer. The offer, which expects the guests here, corresponds exactly to the original offer from the USA. This is part of the Murrell family's corporate philosophy. The suppliers of the ingredients for the Frankfurt branch also had to be approved from the USA in order to ensure that customers in Germany are offered the quality for which FIVE GUYS is so well known and popular in their home country.

A good example of this are the potatoes used for the French fries fried in peanut oil. Only potatoes from beyond the 42nd degree of latitude are used for this purpose, as they grow more slowly there, making them larger and firmer. They are cut anew every day and freshly prepared for the guest. But this is not the only special feature of the FIVE GUYS. Because here every burger is individually prepared according to the needs of the guest. From 15 different toppings, everyone can put together their own personal favourite burger. There is no prefabricated one, every burger, French fries or shakes are freshly prepared after the order. And you can also watch as the kitchen is integrated into the guest room. Such transparency is already unique.

The FIVE GUYS largely dispense with marketing. Expensive advertising campaigns save the company money, as the money is rather invested in the ingredients and the employees. Instead, they use word-of-mouth propaganda. That's the be-all and end-all for us," says Gilcher, "and when you see how popular the opening day was, it becomes clear how well this concept works. The fact that the team could convince right at the beginning with a very good organization and a lot of friendliness also has a very positive effect. And so it can be assumed that the FIVE GUYS will not only be met with great interest by Frankfurt burger fans in the opening phase, but that they will also be among those who will stay even after the big burger boom has ebbed away again.

You can find more information under: www.facebook.com/FiveGuysDE/