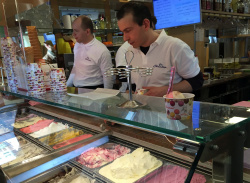 Queue for the best ice in town? The ICE CHRISTINA is cult

When in spring the city's ice cream shops wake up from hibernation and the first rays of sunshine pour over the city, you can regularly observe the following scenery - especially on weekends - on Eckenheimer Landstraße in Nordend. Cars are suddenly parked at impossible angles on street corners and people are even queuing on the roadway next to the cycle path. And for what? For a scoop of ice cream. Or several. But it's not just any ice cream that you can get at EIS CHRISTINA. Many agree that this is the best ice cream in town. And the word has spread far beyond Frankfurt's borders. In fact, the Corrado Spadotto shop is one of the best ice cream shops in Germany. Of course, taste is always a matter of debate, even when it comes to ice cream. But there must be something to the cult around the EIS CHRISTINA. After all, the guests come not only from Nordend, but from all parts of Frankfurt, to join the long queue or to try to get hold of one of the coveted seats.

43 years ago, Spadotto opened a house from today's location to his shop, which since the birth of daughter Christina in 1975 bears the name associated today with excellent ice-cream enjoyment. While the company was running rather side-by-side in the first years, Corrado Spadotto and his wife Petra have been dedicating themselves to their icy passion since 1984. In addition, an ice cream machine was purchased so that the cool delicacies could be produced directly on site. A special accessory ensures that the ice cream becomes particularly creamy and fine. And that's what you taste. No matter whether milk ice-cream varieties such as chocolate-orange, cream-cherry or peppermint, sorbet fruit ice-cream, yoghurt ice-cream, vegan varieties or the twelve different varieties of spaghetti ice-cream - here you really get excellent quality for your money.

Besides the classics, the team around Corrado Spadotto also tries its hand at new creations again and again. The company does not rest on its laurels, but tries to surprise the many regular guests again and again and to reward all those who, especially on sunny days, take on the crowds around the sales counter and the long queues with good quality. Here you can always try something new, but at the same time you can be sure that it will always taste especially delicious. And this is exactly what makes a visit to the EIS CHRISTINA so recommendable!

Further information can be found under: www.eischristina.de